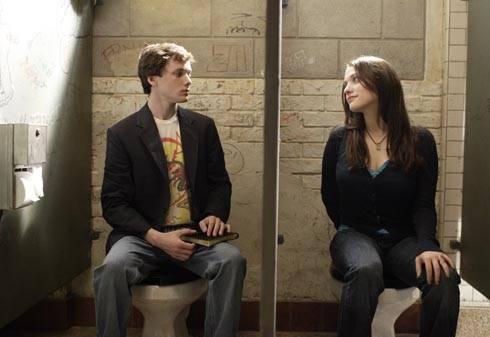 
There must be a policy for Hollywood screenwriters, which holds that a sure way to make your lead character chummy and endearing is to call him ‘Charlie’.  After all, the name is its own cheerleader: “Char-LEE! Char-LEE!’  It didn’t really work in Charlie Wilson’s War and it doesn’t work here. Charlie Bartlett (Anton Yelchin) is a seventeen-year-old rich kid who has been expelled from countless private schools, and finds himself desperate for popularity at his new, anarchic state school. On his first day he has his head flushed down the toilet by the school thug – quite understandably – but he soon wins round the bully, and eventually the whole school, by setting up an illicit pharmacy, in the same toilet as it happens.  Here he dispenses all the drugs he is being prescribed by his own psychiatrist to anxious, depressed and panic-attacked peers.  The much-desired universal popularity follows.

He is broadly allowed to get away with this deviant behaviour because he is called Charlie and because he has the cast-iron excuse: he Doesn’t Have a Dad!  I don’t want to spoil the plot too much, I will simply say that Charlie’s father has done one of the following: a) run away from Charlie and his fragrant but feckless mother (played by Hope Davis); b) been sent to prison for tax evasion; c) been tragically run over by an ice-cream van.  Luckily, Charlie matches up with Susan (Kat Dennings), the daughter of the school principal (Robert Downey Jr).  Susan is similarly lamenting a yearned-for-but-absent parent (mum did a runner) and an all too present dysfunctional one: Downey is on a whisky-fuelled downward spiral, which is making him a disastrous principal as well as a hopeless father.

In fact all the grown-ups are disastrous, so Charlie has to step up to the plate. The pills are flushed down the lav, and he sets up as a psychiatrist instead – still in the toilet – since what the kids needed all along was a good listener.  They queue up to pour out their problems sitting in an adjacent cubicle (the visual reference to sacramental confession is mercifully left implicit).  And the school is transformed, as people figure out what they really desire.  School Thug tidies himself up and gets a date and a part in the school play; the captain of the football team admits he doesn’t want to play football anymore, but go to Paris and paint, and so on.  All of this thanks to Charlie, and no thanks to the grown-ups, though there is the inevitable reconciliation and bonding with Downey, the other man-child in the film.

Even allowing for the fact this a teen movie, it’s pretty thin stuff (anything to do with last year’s Hollywood screenwriters’ strike, I wonder?).  Just as we were getting used to movies which premissed that teenagers might actually be witty and articulate – Juno being the obvious example – this one is a let-down.  Kat Dennings is cool and winning when she’s with her peers, but reduced to snarling ‘whatevers’ in the presence of her father.  Charlie is head and shoulders above everyone in intelligence and articulacy as well as wealth, so perhaps it is understandable that asking people ‘how do you feel about that?’ or ‘do you want to talk about it?’ has such transformative effects.  He sits on the school bus next to a boy with learning difficulties, and befriends another nerdish boy who turns out to be suicidal, but these characters don’t have any life or function other than to show us what a regular guy Charlie is.  In one particularly lazy scene Charlie addresses his adoring fans with the news that actually they don’t need to follow him at all.  They just need to be themselves, and not be told what to do by other people (did someone say Life of Brian?).

So psychiatry is the new rock and roll, or dirty dancing, or whatever.  There isn’t even a memorable sound track to compensate: Dennings sings a soppy and instantly forgettable ballad towards the end. The Breakfast Club and Donny Darko did this better, while Shakespeare saw through the “let’s blame the parents” thing a long time ago (in A Midsummer Night’s Dream, where the young lovers make a break for freedom and still mess things up).  Or perhaps it’s me: perhaps I’ve just had a long term and need the summer vacation.  But I did like Charlie and the Chocolate Factory.