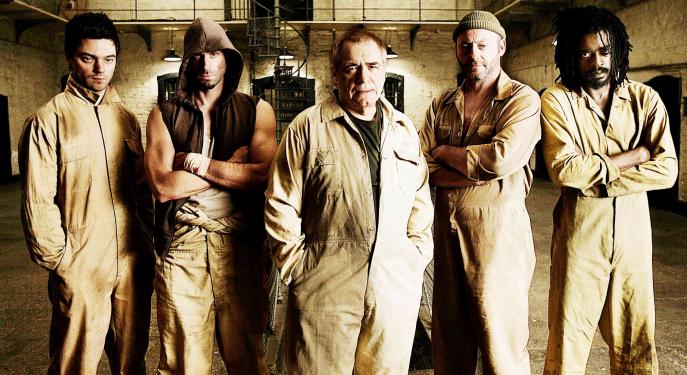 
Held together by a stunning central performance from Brian Cox, The Escapist weaves together a gritty, if generic, prison-break drama with a more subtle and personal tale of redemption. The film flickers between two narratives – one describing the daily grind of prison life and the build up to the escape, the other following five prisoners as they flee into London’s underground – maintaining a menacing tension that overcomes the clichés and slightly disappointing final twist.

Brian Cox plays Frank, a lifer who decides to escape when he discovers that his daughter has become a heroin addict. He recruits his team in a series of scenes that illustrate the horrors of prison: a psychotic homosexual stalking Dominic Cooper’s new inmate Lacey, a rape in the showers, an economy based on home-made drugs, and a Mr Big reigning through terror. Daniel Hardy and Rupert Wyatt have not avoided the obvious in their script – the cons even escape through the chapel, allowing Frank to comment that “God will provide” – but thankfully waste little time inventing backgrounds for the criminals.  Building on little more than names and regional accents, Seu George, Liam Cunningham, Joseph Fiennes and Damien Lewis turn in nuanced performances, capturing the peculiar characters of men defined by crime and punishment.

Rupert Wyatt’s direction keeps the pace fast and steady: by jumping between the two narratives, he gives the entire film the intensity of a chase sequence, without ignoring the interplay between the characters.  Steven Mackintosh’s crazed villain delivers an immediate sense of threat: he prowls around Cooper and Cox, more like Ridley Scott’s Alien than a mere human, preening and oozing wrath and lust.

Wyatt acknowledges that the ending is heavily influenced by a wonderful Ambrose Bierce short story: the twist simultaneously undermines the tension but makes the film far more than just a thriller. It focuses the drama onto Frank’s own life, making the escape an allegory for his personal journey to acceptance.  The final scenes are sentimental and attempt to reinterpret the various stages of the film through clumsy associations: however, the message is clear.  Frank sacrifices himself for his friends, offering a new life to Lacey.

Since Wyatt did not include any spurious details about the characters, this sudden burst of metaphor is believable – it would be harder to take Frank as a hero if it was clear that he had been a child-murderer.  Unfortunately, it undermines the gritty realism: if, as Frank says, “none of this is real”, the intricate detail of prison life becomes irrelevant.  That said, the realism is the least interesting part of the film, sensational rather than engaging.

It is a pleasure to watch a film that allows the actors to develop their personalities, refuses to clarify every plot point several times and shows an interest in visual impact: the underground scenes are vividly expressionistic.  The moral lessons are discreet, and the tension between the poetic intentions of the story and the harsh context develops into a gripping drama.  Engaging and compassionate, The Escapist is a challenging yet refreshing alternative to the blockbuster.

How united does a country have to be?

Obama and the politics of community organising