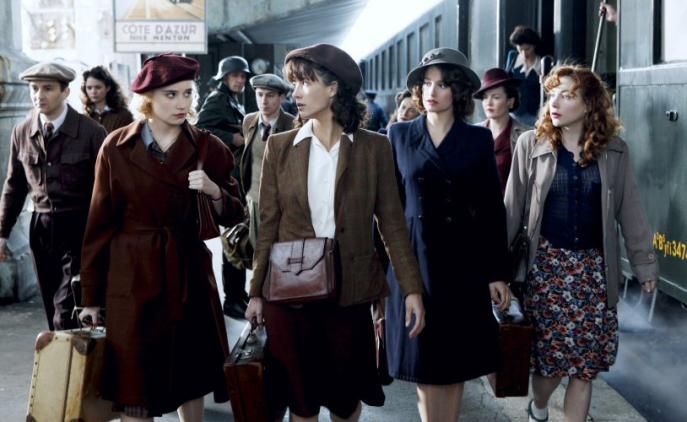 
Saving Private Ryan. The Longest Day. The Thin Red Line. When many of us think about World War II, our minds conjure up images from such films of young men bravely risking their lives in the line of duty.  Such imagery, I would argue, fuels the common view present even today that war is a man’s world (see the discussion surrounding the death of British soldier, Cpl Sarah Bryant, in Afghanistan).  In his new film, Les Femmes de l’Ombre (translated as Female Agents), French director Jean-Paul Salomé strives to change this perception by telling a tale of female Resistance fighters, inspired by the life of Lisé Villameur.

The film opens with a pair of hands nimbly assembling and loading a gun – hands that we soon see belong to highly skilled sniper, Louise. Through what is meant to be a tragic series of events, Louise finds herself in London at the Special Operations Executive, reuniting with her brother and assembling a team of women to parachute into France to rescue a captured geologist who has vital information regarding the Normandy landings. Although the premise sounds thrilling, the unfortunate truth is that the screenwriting falls rather flat.

First, there is the team itself. Louise is a believable choice, especially after we see her in action.  Maria is a radio operator, a useful member of such a mission.  Gaëlle, a young explosives expert, also seems a logical choice.  However, I did wonder whether a showgirl and a prostitute on death row for killing her pimp would have been recruited for such a role in real life, but I suppose suspension of belief has its place in film from time to time.  What troubled me most was that the women were coerced or bribed into joining the mission, with one saying shortly before parachuting, “I’m not dying for the French flag.”  Such a portrayal seems to taint Salomé’s very intention of highlighting these women in the shadows, since the real women like Lisé fought for patriotic reasons, not to avoid court martials or hangings.

Second, the screenplay struggles to develop these women’s roles.  Suzi, the showgirl, and Maria appear from time to time onscreen, but we never truly understand what makes either tick. Gaëlle’s character is uneven: a devout Catholic who shoots a man in the back, blows up a truck, but cracks almost before her torture begins. Some might argue that this only demonstrates the complexity of her character, but I was simply puzzled by her portrayal.  Louise and Jeanne, the prostitute, are the strongest characters and the only ones who undergo somewhat plausible transformations of character through their interactions with the team and, in Louise’s case, with the discovery of a secret.  The writing of these characters is far from profound and often clichéd, and I was left feeling that this film is about women, but is not told from a true, female perspective.  However, the actresses do their best to fill the parts, even if their outward, unblemished beauty belies the fact that they were fighters.  Sophie Marceau, in particular, plays Louise with a deadly iciness that would have sent William Wallace running in the opposite direction.

Despite the film’s flaws, it does contain plenty of suspense and even one moment that made nearly everyone in the theatre jump in their seats.  Salomé’s portrayal of torture victims avoids the stoic, unbending individual and shows the fear and limitations that each person possesses.  And in the case of Gaëlle, he demonstrates how the act of torture can even break down pieces of a strong belief-system.  Female Agents provides dramatic action, romance (of sorts), a few quite witty lines and, most importantly, a platform from which the female WWII Resistance fighters can move out of the shadows and have their contribution recognised.  I simply hope that the film leads many people to read about the women like Lisé Villameur whose heroic lives are far more spellbinding than any film.

Tensions between peace and violence