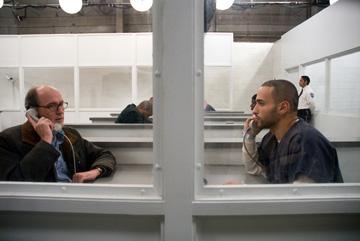 
‘You can't handle the truth! Son, we live in a world that has walls’

There are two extended metaphors that beat through this film:  music and teaching.  I’ll come on to the reasons for the Jack Nicholson quote a bit later.  (And if you’re reading this review hastily before deciding whether or not to see The Visitor, please be assured—or warned—it is nothing like a Jack Nicholson film:  it’s more like an Eric Rohmer—a carefully paced character study with carefully interlocking, sensitive human relationships).

Back to the metaphors.  One of the first things I remember being taught at secondary school was that music is a language—an international language.  Walter is an economics lecturer who’s been trying to hablar la musica for some time, but the piano lessons are just not working.  It’s only when he meets Tariq (a jazz djembe drummer who has been conned into renting illegally Walter’s New York flat), that Walter begins to fly.  Walter shares his flat, Tariq shares his instruments, and Walter learns to communicate in the language of the music, talking to others he’d never before have spoken to, finally becoming a full member of the unutterably cool ‘Drum Circle in the Park’.  The extent of Walter’s new found fluency is best seen in a beautiful moment towards the end of the film where he and Tariq communicate through the glass barrier in a detention centre, swapping rhythm for rhythm.

Which brings me to the second metaphor, for—university lecturer that he is—Walter is a teacher.  But right now, not a good one:  he’s been teaching the same course for twenty years, and is trapped in a chronic narcissistic misery following the death of his wife that forms an impenetrable wall between him and the needs of the young people in his care.  What Tariq shows (as he teaches the dulled, white dude how to use a drum) is that teaching is about care, communication and the individual.  Tariq draws the older man out, simply through being a good musician, being interested in Walter, and having a belief in his ability:  via the drum, Tariq teaches his pupil about his life and his emotions and as the rhythms unroll—becoming ever more complex and interlocking—Tariq shows us all what it is to enjoy the process of living again.

Other reviewers have been charmed by this film—I suppose as well as the sentimental pleasure, this one is equally interested in its cunning manipulation and political savvy:  it’s almost impossible not to like Tariq and his beautiful partner Zainab.  The man Arabic, the woman a black African (and both Muslims), they represent two touchstones of prejudice—but these two are responsible, hard-working, and fit neatly into the life of bohemian New York, not quite filling that ever present void that we all think of when we now look on the Manhattan sky-line where the Twin Towers used to be.  They are citizens in all but name and paperwork.  And even though, as Tariq says at one point in the film, ‘I have done nothing wrong’, everyone walks powerlessly into a Kafkaesque battle with the nameless, bland and relentless immigration machine.

The bitter truth about immigration is that it’s another area where those with power keep it.  Of course, it’s much more complicated than that simple statement might imply:  unbridled immigration would no doubt drive down wages, cause economic and social crises, feed ethnic conflict on which the far right would gorge themselves, and in consequence, all those things we value—order, education, the health service—would be stretched to exhaustion or ripped apart in a war of appalling attrition.

But the fact is—the truth is—I have things that others don’t.  I live in a stable, democratic society, I can visit my doctor, my friends have their cancer treated, my god-children survive childhood, I am paid to teach people.  My salary is secure.

Which brings me back to Jack Nicholson, and that question about the truth.  Can we handle the truth?  Nicholson’s character goes on to say ‘We live in a world with walls, and those walls have to be guarded by men with guns’.  I don’t know whether you agree with this as a statement of policy, but it’s what happens.  And The Visitor is a good film because it holds that truth in front of our complacent eyes for two hours.

Thinking about the Council