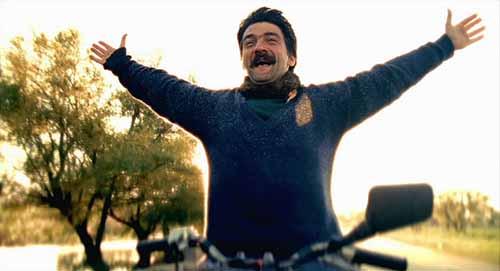 
Beautifully shot, El Baño del Papa (‘The Pope’s Toilet’) portrays the poverty and despair in the Uruguayan town of Melo in 1988 through characterisation rather than through shock tactics with the camera.  The difficult living conditions of Melo’s residents are shown for what they are and are not scandalized for effect, to the film’s great credit – in fact the most striking visual imagery is of the Brazilian and Uruguayan landscapes rather than of extreme poverty.

For the people of Melo, trapped in the routine of their daily lives, the news of a Papal visit to their small town comes as a blessing.  Not a spiritual blessing, but an economic one.  Rumours quickly spread of the number of people who will descend upon the town for the historic visit – fifty, sixty, even two hundred thousand. Cue the development of numerous get-rich-quick schemes, all of them centred around feeding the anticipated hordes of tourists, with one exception.  The film’s protagonist, Beto, Melo’s answer to Del Boy who earns his crust smuggling goods back into Uruguay from Brazil, finds his niche in the market in a semi-drunken moment of inspiration – he will build a toilet and people will pay to use it.   The trials and tribulations of his project are chronicled humourously without ever neglecting the extent to which the townspeople are relying on this visit to improve their quality of life.

The film contrasts the global with the local, the universalism embodied by the arrival of the most widely-travelled Pope with the grassroots reality of life in Melo. The inwards-looking mentality of Melo’s residents is illustrated particularly through Beto’s wife, Carmen, and through their daughter, Silvia.  Carmen’s worldview does not stretch beyond Melo; her daughter’s ambition to escape the town and her greater knowledge of the world beyond Uruguay scare her. The complexities of life on the breadline are explored through her concerns, which do not stretch beyond her family.  Silvia however feels trapped in Melo: her ambition to have a career in journalism is continuously thwarted by her father who wants her to earn a living by joining him on his smuggling runs.  She longingly listens to the radio, reads magazines and watches television.  In a poignant moment, it is through television that she witnesses and finally understands her father’s commitment to his work and his family, something she had never managed to see through her own eyes.  This moment of clarity leads to her rejecting her own dreams in favour of those her father has for her. The world outside Melo is lost to her too.

When Beto visits one of the numerous would-be entrepreneurs who plan to make their fortune selling chorizo, he asks, “Is the Pope going to save you too?”  Constrained by their impoverished lifestyles, the Papal visit is an opportunity for these people to build up the capital to transcend their current situation, and so it is no wonder that they repeatedly employ the language of salvation to illustrate their expectations for the visit.  It is only through Carmen that any religious faith is demonstrated. It is she who symbolises faith in God, rather than faith in the earning power of Pope John Paul II.  Her God is the God of the liberation theologians: she responds to her husband’s declaration that God will help them bring their project to fruition by saying: “If He doesn’t help the poor, who does He help?”

The bleak and uncomfortable message behind all of this is that life will not change for this town.  The one person with dreams to escape has her ambitions transformed, the corruption that pervades the town’s authorities cannot be escaped, but there is an indomitable hope despite all of this.  Setback after setback never dampens the spirits of these people who have accepted their lot and struggle to make the most of life.  They value their work and their routines.  Beto’s fury at hearing a TV reporter summarise the visit as having brought hope and prosperity is probably as much a reaction against the implied affront to the way things were, and will continue to be, as it is against the evident falsity of the statement.

At the height of Beto’s despair, as he rushes to complete his now all-but-futile mission with the Pope’s speech already underway, an excerpt of the speech in question can be heard on the radio: “Work must not be performed simply to earn a living.”  Never has the phrase ‘preaching to the converted’ been more appropriate. Try as they might, the people of Melo cannot do any more than earn a living, and so they have no option but to value their daily toil in and for itself.  They have no choice but to live this message that the Pope brings to them, and they certainly cannot rely on his visit to change this reality for them.

This film’s charm lies in its unflinching optimism in the face of despair.  It raises questions about the relevance of the institutional Church to Melo and every town like it where the harsh realities of life mean that worldly and eternal visions of transcendence and salvation merge into one, as they are as distant as one another from life as it stands.  With a touching honesty, the film depicts a community not often captured on cinema screens, where wealth is not even something that can be dreamed of.  And lest we should forget, in the midst of our enjoyment of the film, that the plight it depicts is and was real, the opening frames announce:

The events of this story are in essence true, and it is only by chance that they didn’t happen the way they are told here.

Visit this film's page on the Internet Movie Database

My Own Personal Ignatius