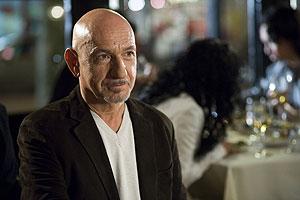 So, a fat, bald, middle-aged man gets Penelope Cruz into bed. What's there not to like?

Well, not very much, actually.

The show even started before the film, as two very different groups gathered in the foyer and eyed each other suspiciously. Blue besuited young men had obviously come to see Penelope Cruz, but now wondered as they sipped weak cinema lager whether, with this other lot here, if they should have just gone to Batman instead. The other lot pulled their hands through long grey hair, said nothing, clutched their raffia bags closer to their print dresses and kept their eyes on Ben Kingsley’s picture in the film poster. I wondered how the film could possibly match the tension at the bar. But it did.

Ben Kingsley is David Kepesh -a libidinous, libertarian English academic historian and literary critic, an aging apostle of the sexual enlightenment of the Eighties, working in a nameless New York university and attempting to rescue American history from the puritans of past and present. And, of course, have a little non-committal fun along the way. In so doing, he discovers his own rapidly aging past as a cultural refugee from marriage and parenthood and most other kinds of human fulfilment, symbolised by the figure of his long abandoned son, who broods over the entire film like a young New Righteous commendatore to Kepesh's damned Don Giovanni.

Ben Kingsley plays Kepesh as a rather more fastidious, indeed somewhat vegetarian, Hannibal Lecter who predates upon his impressionable young female students in what his son describes as "serial tomcatting". He has only one redeeming feature – a capacity for friendship with two other aging teenagers, who meet now and again for coffee, conversation, squash or coitus.

Penelope Cruz is Consuela, a second generation Cuban-American, the best looking of his students that year, a throw-back to a more elegant era and obviously the catch of the season. Certainly Cruz looks the part, (described by one of my colleagues as "possessed of the most beautiful divergent squint known to ophthalmological science").

And so we have a simple chase movie in which the elderly cheetah gradually downs his prey using his tried and trusted techniques of Bach and Goya. And then, having caught it, finds himself more possessed than he had anticipated. Suddenly, the chase is not so simple: the prey has not simply been deceived into bed, like many others before her. Over weeks and months, Kepesh discovers that he has been known in both of the Biblical senses - and loved perhaps for the first time by someone who knew his true reality.

Shocked, shattered and embarrassed (in pretty much that order) by her moral integrity in love, he suddenly he discovers that he too has a biological clock. And one last proper chance at creating something greater than his own pleasure and longer than his own life.

But it is not an altogether happy experience. Kingsley has a truly amazing ability to portray the six year old boy inside the sixty year old man: suddenly vulnerable, pathetic & lost; overwhelmed by his good fortune and unable to trust himself to it. And so, after a bumpy ride, he destroys his own love, either in a moment of his own vanity, or in the cause of a greater good – we are invited to consider both possibilities. One particularly beautiful touch is the way in which Kepesh's piano playing gradually improves throughout the film, not in technical ability (that would be crass), but in interpretative quality. He is being taught not only how to love, but how to live.

So, what's there not to like? Precious little, really.

Perhaps, some images are a little derivative: betraying influences as diverse as Spielberg's Titanic and Solzenitsyn's Cancer Ward. Maybe Penelope Cruz, even with Croixet's cunning lighting, is now a little too old to play fresh-faced student innocence (though I didn’t see any of the besuited boys complaining). Certainly, Coixet only narrowly refuses many opportunities to be crass: there were moments when I was sure that we were about to be told to seize the day or that there is no man who cannot be redeemed by the love of a good woman. And at one point she comes perilously close to a group hug. But if you can convict her of a cliché, then it is a noble and ancient one: There is no man so post-modern that he is incapable of learning, even in advanced age an ancient truth: Ubi caritas et amor, Deus ibi est.

As we left, the blue suits walked taller; the women’s eyes gleamed; and one or two of them smiled at each other.

If you have ever loved and chosen to lose for what you hoped was a greater good and wondered if it might be simple selfish vanity, this film will speak to your heart and enlighten the eyes of your mind. Like I said, what's there not to like?