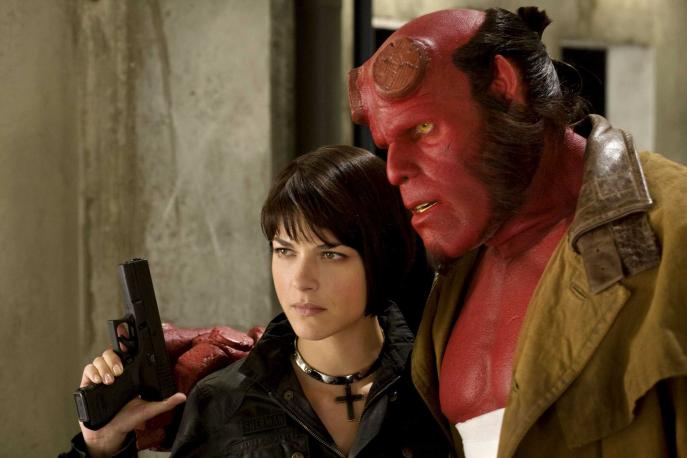 There are a number of thought-provoking and enjoyably dark moments in Hellboy.  My top favourite is the tooth fairies: they’re called tooth fairies, because they start with your teeth—and then eat the rest of you.  These are released from the forgotten or repressed realm of the unconscious to scuttle around safe, urbane Manhattan with the speed and agility of cockroaches, the fearsomeness of scorpions and the rapacity of locusts.  They are just one of the numerous reasons (an angry elf reminds us in the first fifteen minutes) why we used to be scared of the dark, until we forgot about the existence of that other, shrouded, shapeless world from which Hellboy and the other demons-not-demons in this film come from.

Another nicely dark sequence comes with one of those moments of heroes’ weaknesses—as always, a combination of the physical and iconically male with something softer.  On this occasion, Hellboy is mortally wounded by the magical tip of an elfin spear, broken off and embedded deep into his flesh.   Every time science tries to remove it, the lustrous metal shard magically grows a millimetre or two, further menacing the hero’s heart.  This is more than a literal danger, for Hellboy is in love with another paranormal being, the beautiful and fiery Liz, by this point in the film known to be carrying his babies in her womb. After the briefest of quests, Hellboy—in the arms of his beloved, almost like a pieta—come into the presence of the only creature that can save him:  his own Death.  Death offers Liz a choice:  life now, but only with the assured and certain destiny of a worse and more painful fate later. In a choice that seems to mirror Mary’s, but with even more than a mother’s feeling, Liz chooses the pain of love, in the knowledge of this prophesy of appalling destruction: Hellboy’s destiny is to destroy the world.

For at some point in this sequence of films, this ‘Hellboy’, the ‘Child of the Fallen One,’ will be forced himself to choose between the human and the diabolical. On this occasion, he is challenged to choose between the uncontrolled greed and selfishness of humanity and defending the environment they have ravaged.  This part of the plot is a bit like Prince Caspian, but nastier:  the creatures of wood and glade are again rebelling under their elfin leaders, but we (humanity, the audience) we’re on the wrong side.  Nuada’s frustration at the brutal exploitation of the earth by men leads him to slay his passive father and king to assume the role of Oedipal eco-terrorist from yet another corner of middle earth, unleashing on the world of men not just the magical engineering of the Golden Army but the elemental forces of nature.  This is embodied by a monstrous, walking plant, the ‘Elemental:’ a cross between Godzilla and King-Kong (but with a triffid’s body), the Elemental writhes around Manhattan, destroying the symbols of commercialism and consumerism in great crashing blows from its flailing boughs.   Clearly, this is one of their bad guys that our bad guy has to destroy.  Which Hellboy does, but not before confronting some questions: is this what you want to do?  do you want to destroy this embodiment of the power and rage of the natural world? Or, as the angry elf puts it very nicely, ‘which holocausts should be chosen’?

It doesn’t take too much effort to move from that stage further to question who is the enemy? who is right? on whose side are we?  And it’s not just there in the ecological subtext.  In other films, the young regicidal (and maybe even patricidal) prince fighting for the defeated and betrayed underdog is the hero we sympathise with.  Here, we find ourselves rooting, unthinkingly and untroubled, for the other side—our hero in the rugged, rough-and-tumble Hellboy is, after all, the Devil’s Child.  Where-else and when-else might we have made that same mistake before?

Anyone who saw Pan’s Labyrinth will recognise in Hellboy II the imaginative world of Guillermo del Toro:  a world of beautiful fear and the monstrously beautiful, where our fantasies of childish innocence morph and skitter alarmingly into the bizarre and the terrifying, where the mutable and the ambiguous play over the surface of harsh political facts.  I wonder if Hellboy is similarly about a childish search for political clarity in a world which seems opaque and coloured by doubt, ambiguity and divided loyalties.