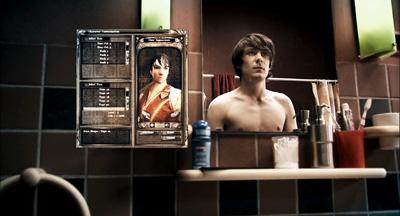 Several months ago, a male friend of mine forced me to sit through the film Hitman.  As someone once said about another film, ‘it was two hours of my life I will never have again’.  We had an inkling that things were not going well when the opening credits included the line ‘based on the game’.  ‘Based on the game?’  I thought to myself, doubting my eyes.  A film, based on a video game?  And to admit it, too, in the opening credits, as if this were something to be proud of.  Well, it was a first for me—I am used to films of books, and books of films, and action figures from films (I’ve even owned one or two) but to watch a film in which the plot is derived from a video game is like having your teeth drilled:  lengthy, occasionally painful, but essentially rather dull.

Partly this is because the ‘form’ of the video game (if one can talk of such things) requires superficial characters, spindly plots and lashings of action, in which the player is the principal agent.  It’s simply contrary to the narrative logic to watch and not participate.  That said, there is something interesting going on in the overlap of fantasy and agency between the two forms:  empathy with a film or drama’s central character triggers some connection between us and them—how many little boys have not yearned to be Luke Skywalker or Obiwan Kenobi or (in my case) Yoda?  Even if we don’t actually want to be them, films—and all other forms of storytelling—usually work because we allow the fantasy of the imagined world to live:  we talk of characters as if they are real people, we imagine their worlds as if they really exist, even when writing reviews.

And when films come, as Ben X does, no longer on traditional celluloid or its equivalent, there’s an additional bite of digital projection:  the very form signals its claim to project or mirror the truth, to be a type of reality—gone are the judders, scratches and wobbles of film that tell the watching masses that they are watching film; now the characters shine on the screen as if they are truly alive.

Writer director Nic Balthazar seems to have seen some of these possibilities, and has exploited them in a film which is about a young man who himself blurs the boundaries between the real world and the video world.  When he logs-on to Archlord, Ben becomes an all-conquering hero; in the real world, his aspergers’ locks him into himself and makes him the target of bullies.

Allowing this conceptual confusion to find its way on to the screen, Balthazar has filmed Ben X in both the visual language of the video game, and a self-consciously hyper-real filmic style.  This latter—exploiting the shiny, ‘its-as-if-you-are-really-there’ qualities of digital projection—is used to represent the ‘real’ world in the imagined world of the film.  As the plot unfolds, the reality of the story is repeatedly re-captured and re-presented in on-screen video-recordings, or MMS messages.  These differing languages overlap throughout.  The opening credits are designed like the menu of a video game, and the ‘dramatic’ diegetic background music from the game being played by an unseen hand suddenly becomes part of the ‘real’ world of the film.  There’s a nice moment, incidentally captured on the trailer, when the camera pulls out of the game into the gamer’s bedroom, and then back into the game again.

Added to that, it is quite simply a fantasy about fantasy.  The film is fantastical not simply because the central character blurs the lines between the imagined world of the video game and his painful life, but because the plot itself, though ‘based on real events’, seems over-theatrical, and just that little bit incredible.

All of which formalist blather makes it easy to forget what the film is about: a young man and suicide.   In the UK and Ireland, 23 children killed themselves in 2006; and in the same year there were 636 suicides in the 15-24 age range[1].    These are brutal facts, and the film shares in places that brutality: ‘throw yourself under a train’ says one character at one point ‘but even if you’re lucky and your head’s cut off, consciousness continues for 15 seconds afterwards… think about it ‘.  It’s a brutal clarity shared with those who have thought about ending their own lives.

Despite this, through some clever plotting, the piece turns out optimistic and positive.  But not without exposing the simple fact that some people find school unbearably painful (and some schools do nothing about it), and sometimes it takes things to go drastically wrong before people’s chronic misery and sadness is addressed.

[1]  Source:  The Samaritans, using data from the UK Statistics Authority and the Central Statistics Office, Ireland.