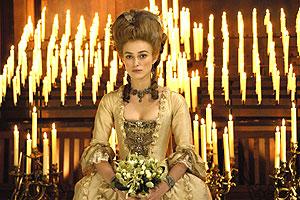 
From the beginning of The Duchess we know where we are. A countryside, sprinkled with sheep; young men and women delighting in jollity whilst their parents busy themselves with marrying off their own produce; abbreviations are not even thought, let alone spoken – it must be the English past.

The Duchess hands us a dramatisation of the particularly feminine hell of the 18th century. Here it is the age of artifice, of flawless veneers, wigs, fountains, parasols, dances, repression. Georgiana, the eponymous duchess, is married to Ralph Fiennes’ Duke of Devonshire, a man to whom conversation comes in a series of ‘mmms’ ‘hmms’ and the occasional grunts. He expects of her a male heir and utter submission to his will. She expects some form of tenderness.

It’s all ripe story-pickings from history’s database of human behaviour. The Duke moves his mistress, Georgiana’s only friend, in to live with him and his wife. It’s a horrific ménage a trois, and the sexual encounters between husband and wife are marked by an emotional abyss. The Duke is a demonised character, bemused by his wife’s reactions to the situation and impenetrable in his assumption of complete authority. It’s a shame that there is no sense of the social pressures upon him - why the need for a male heir was so important – as without this the drama loses its human complexity and he becomes a taciturn monster.

Teamed up with the monster is Keira Knightley. There is barely a scene without her, and her face is portrayed in close up, beauty giant-sized across one third of the cinema screen. The camera meditates on her face, with its fierce jawline and that oddly horizontal upper lip. It’s a part made for her crystalline accent – the Duchess doesn’t really have much of a personality, rather she’s a series of picturesque reactions to horrible events.

There’s also an implicit worship of Princess Diana, who was a descendent of the Duchess. Georgiana “needs to be loved” by the crowds, and courts attention with fashion; her affair is understood in the light of her emotional deprivation by her husband. In the trailer to the film, a portrait of Diana fades into the background. Thankfully the reference is not pressed any further during the film, but it’s clear whose story the film aims to tell.

All in all, it’s a prettily produced costume drama, one whose unvaried tone left me fairly unmoved. It is firmly rooted in its genre (I began to wonder whether these type of productions share the same costume department), so much so that the only reference points the average viewer has for the authenticity of its history are other generic costume dramas. If you’re going to watch The Duchess, you’ll probably love it; if you aren’t going to, there’s not much you’ll miss.

The Eucharist and care of creation – an ancient perspective

The Temptation of Jesus