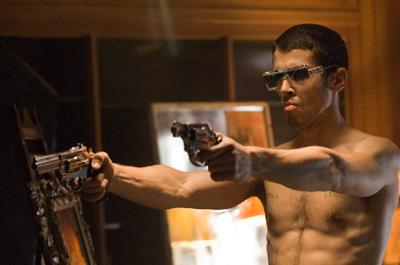 
R U a RocknRolla?

Perhaps the mistake was to go and see this in Leicester Square - I never go there without the feeling that something in my soul has died behind the radiator and begun to smell. Perhaps too, it may be unwise of a reviewer to criticise a film directed by the landlord of his local. Who knows where his next pint is coming from? But a man's gotta do what a man's gotta do.

Maslow believed in a hierarchy of human aspirations – that human development enabled people to transcend their most instinctive wants of air, food, sleep and sex, to achieve security, love, self-esteem and ultimately self-actualisation. Ritchie believes something similar, except that for him the ne plus ultra of human existence is to be a rocknrolla – the gangsta who has it all, the crack, the guns, the partly controlled violence, the wisecracks, the respec’ and most of all the glottal stop of east end stree’ credibility.

Lenny (Tom Wilkinson) is the current incumbent - the self-styled ‘eadmasta’ of the old school – a Kray-like gang-boss who has climbed the underworld’s greasiest pole to a pinnacle from which he bribes the police, blackmails the judiciary and holds the local council’s planning authorities (on one occasion literally) by the balls. He rules his school with fear and violence meted out by his loyal lieutenants and feeds particularly naughty boys to carniverous crayfish.

One particular class in his school is "The Wild Bunch" - a likeable mixed bunch of everyday east-end career criminals who look after the neighborhood, only do bad stuff to their own kind and are always good to their mums. Like all well-run public services, it has a strong equal opportunities policy – one is gay, one is black, one is Scottish and one is learning disabled. Their secret dive is a haven of liberal multicultural respect in which each villain is encouraged to develop his personal aspirations in a supportive and non-directive atmosphere. Surely villains like this exist only in textbooks of social work.

And somewhere outcast in the darkness is Johnny Quid (Toby Kebbell), Lenny’s rockstar stepson who tones his magnificent torso entirely by sitting very still in a leather armchair and smoking the most enormous crack pipe I’ve ever seen! Oddly, we only get to hear him sing once – Ritchie’s idea of biting social comment: “Some is rich and some is poor and that's just the way the world is."

But globalization is a problem everywhere. Into this thriving and harmonious multicultural community of loveable rogues comes Uri Obromovich (Karel Roden) - a recently arrived Russian billionaire: ginger-haired, undershaven, socially gauche & the owner of a smart London premiership football club. Who could Ritchie possibly have in mind?

But if you think the characterisation is a bit dodgy, then take a look at the plot! Obromovich and Lenny enter into a corrupt land deal: Obromovich will pay 7 million euros to have Lenny use his corrupt influence with the local authorities to expedite planning permission for Obromovich’s huge property development. To seal the deal Obromovich lends Lenny his ‘lucky painting’. In no time at all, Obromovich’s beard is singed first by Johnny stealing the painting and secondly by the Wild Bunch being commissioned by Stella (Thandie Newton), Obromovich’s accountant and love interest, to steal Obromovich’s payments to Lenny. And so the caper begins as the baddies chase the goodies – Lenny chases his lost step-son and the painting; the Russians chase the Wild Bunch and the money.

There are some delightful funny moments along the way – many of unintended hilarity. To help the plot along, Archie (Mark Strong) provides a voice-over commentary in short simple sentences for the hard of hearing. And it is just his luck that his first lines form the first cinematic casualty of the Credit Crunch as he outlines the premise of the entire film: “Property values are going one way: up, up and up again.” That got the biggest laugh I’ve heard in a cinema in a long time.

To be fair, there are also moments of genuinely brilliant and deliberate comic timing. But the oddest thing in this bizarre film is the way Ritchie uses violence. While there is one particularly savage beating up of a gangland bouncer, most of the brutality and all of the death is kept just slightly off camera. And much of it has a strange cartoonish quality - the Russian baddies take more punishment than Tom and Jerry, but just rebound into shape and keep coming back for more. You can’t help but wonder if Ritchie saw the rushes, decided it wasn’t working as gritty east-end realism and decided to play the second half strictly for laughs.

And it is only in the second half that Ritchie really shows his hand – or at least fesses up that this is obviously intended as a low-budget British remake of The Godfather. However, the central genius of that film was its portrayal of a man driven by what he believed was family duty into a parallel and perverse moral universe. True, this film also inhabits a parallel moral universe; drugs, mayhem, torture and murder are perceived as rational and emotionally mature responses to the human condition, but here there are no positive values to be considered. In Ritchie’s universe, love does not exist; even sex gets a mere four gasps (count them!), for which Thandie is not even required to disrobe. Nobody does anything at all for any reason other than immediate personal gratification.

So, I think the message to my pub landlord is: ‘Don't give up the night job.’

Driving the Poor to Starvation

Sorrow not sorry: Learning from Dresden