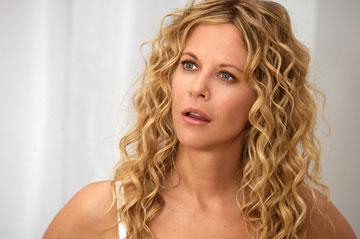 
You have to give the producers of this film credit for being so upfront about who their target audience are.  The opening frames of The Women, with images of high heeled-feet tottering down New York streets are a shameless homage to the biggest female-led phenomenon of the last decade, and they might as well have written “If you loved Sex and the City then this film will be right up your street” in big letters across the screen.

The plot revolves around Mary (Meg Ryan)’s discovery that her Wall Street husband is having an affair with a “spritzer girl” (Eva Mendes) from whom he bought some aptly named perfume - ‘Jezebel’ – for his wife.  With the support of her three closest friends, Mary then has to move on and rebuild her supposedly shattered lifestyle for her own sake and that of her pre-teen daughter, Molly. All fairly standard stuff, but thoroughly unconvincing when played out on the screen.  For starters, there seems to be absolutely no reason whatsoever why these four women should be friends.  We are told that Mary and best friend Sylvie (Annette Bening) went to college together, but when you throw the other two women into the mix it becomes a peculiar foursome.  A shame really, as much of the comic relief in the film comes from these three women – if only their presence in Mary’s life could have been a bit more understandable.

It is even more of a shame that Meg Ryan plays the role of the jilted wife with the emotional depth of a puddle.  Prior to the revelation of her husband’s cheating, she is not exactly convincing in the part of the Wall Street wife – not entirely her fault, as the character is implausibly written as a fashion designer who also does her own gardening, retiles her own bathroom and has a wardrobe about as glamorous as the state of her nails after finishing these tasks – and so her descent into heartbreak is not exactly tear-jerking cinema.  She stomps around her house like a stroppy teenager, whinging to her housekeeper and her daughter’s nanny about her philandering husband, but never crosses into the range of emotions one might expect from a woman whose thirteen-year marriage is on the rocks.  This only works in the film’s favour when Sylvie betrays Mary to further her own career and Mary is convincingly more upset by this betrayal than by her husband’s – the point that she needs her friends more than she needs her husband comes across loud and clear.

It is not Mary’s friends who end up helping her out of her problems though – some sage advice from her mother (Candice Bergen), who was also cheated on, gets her part of the way there, but it is Bette Midler’s brief star turn as Leah, an LA agent whom Mary meets on a retreat, that really turns  things around.  If only a lesson in solipsism over a joint from a woman who is about to divorce her fifth husband could solve all of life’s problems in the real world.

And solve Mary’s problems it does.  All of a sudden a slightly sombre Mary invests in a good pair of hair straighteners, a wardrobe that suits her lifestyle, and she kickstarts her career as a designer in her own right instead of working for her father. But that’s about it.  No emotional barriers are broken down; we are supposed to see a change in her relationship with her daughter but it really stays exactly the same (a sub-plot involving Molly seeking advice about her self image from her mother’s best friend should either have been fleshed out or ignored altogether; left as it was it trivialised the issues of the young girl); and her “ I can have everything; a career, my friends, my husband” attitude would be all very well… if she didn’t then compromise on her career.  Her husband does, of course, come crawling back, but this seems like it could be as much because he is fed up with his mistress and her spending than anything else.

The moral of the story is clearly intended to be one of girl power: as long as a girl has her friends she can be happy - who needs a man?  However, this was more convincingly articulated by the Spice Girls ten years ago than through this film.  To drive home the message, not one member of the less-fair sex appears in the film until the very final frame.  Not one. Not a business man walking down the street, not even a security guard at the New York store who will not get a mention here due to the fact that they have probably had at least a year’s worth of PR from their numerous mentions in the film.  It feels like the film is attempting to promote the idea of some kind of male-free utopia, but the result is just a bizarre cinematic experience which comes across as petulance on the part of the film-makers.

The friends’ allegiance to one another is repeatedly emphasised throughout The Women, and best depicted in a scene where Mary’s friends confront Crystal the spritzer girl at her perfume counter.  Their fierce loyalty to Mary is counteracted by Crystal’s friend admiring the mistress’s manipulation of her lover over the phone; friendship will often ignore the boundaries of right and wrong.  However, aside from this there is not much that stands out about this film.  It is hard to root for a character as vacant as Mary, and equally hard to overcome the oddness of the man-free world that the film inhabits.  In the words of Mary herself, “Eurgh, women.”

Dialogue and the Church – Part One