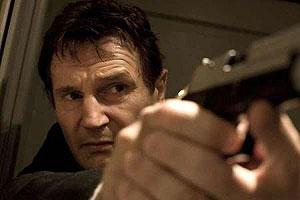 
It is a simple plot: over-protective, divorced, ex-CIA agent father lets teenage daughter go to Paris (against his better judgement). She is kidnapped by sex-traffickers and then sold to an Arab.  Daddy saves his little girl.  People die.  I suppose that’s what cinema executives call a ‘high concept’.

I hope I will have been forgiven for laughing out loud during the dénouement:  it was the moment when a gun-toting Arabian hood opens a door to a luxurious cabin aboard his master’s yacht and says to the aging, fattened, Arabic plutocrat lounging amongst pillows and cushions that ‘the girls are being prepared for you, now, sheikh.’  At least he didn’t actually say ‘effendi’.

The central image in the last act of this shoddy little shocker, therefore, is a good old-fashioned favourite:  nice white, western virgins about to be taken by oily oriental male sexuality.  (I will leave for a later polemic the whole issue about daddy saving his little girl).  It’s the sort of image that would have been painted a hundred and fifty years ago by Alma Tadema, Delacroix or Ingres.  Edward Said’s Orientalism should have rendered moments like this impossible in contemporary cinema.  Said, writing in the seventies, showed how the painted dreams of Ingres and the rest was a vision of a non-existent East framed by the cultural logic of western Imperialism.  In the case of Taken, we are offered the cultural logic of the world post 9/11:  the only racism that is permitted now is that against Arabs and Muslims.   And if readers think this is a little strong, I think that ‘racism’ is the only word to describe the casual perpetuation of thoughtless racial stereotypes.

That a film which purports to be a major release should have at its centre the mindless reiteration of such an appalling Islamaphobic fantasy is either gross cynicism or gross ignorance.  In neither case should Liam Neeson have dignified this scandalous, tawdry piece with his presence.  Maybe some sense of dissatisfaction on his part explains his rather lack-lustre performance.  He’s pretty good at playing the ruthless killing machine (a role which occupies the majority of the film), but the character moments are shallow and unconvincing.  The script hardly allows him to be anything else, and the rest of the film was a splice-by-numbers combination of shallow characterisation, predictable back-story, conventional car-chases, big bangs and comic-book morality.  I laughed again when I noticed that it had the rank pretentiousness to call itself ‘a film by Pierre Morel’.

Make a film like this and the men in your audience might forget the inconvenient truth that sexual traffickers bring girls like Neeson’s sweet teenager daughter (but less sympathetic because they don’t talk English) to our countries and our cities.  They do this because there is a market here.  British men, American men, French men, buy the victims of sex-trafficking, not just Arabs.  To make a film like this is irresponsible:  the film-maker has disregarded the power of his medium to make realities in people’s minds, and  men seeing this rubbish will leave the cinema with a myth re-inforced and a real and dangerous issue trivialised and fantasised for mere entertainment.

I’d think twice before going to see this film and giving these people your money.

The Ugandan determination to make progress