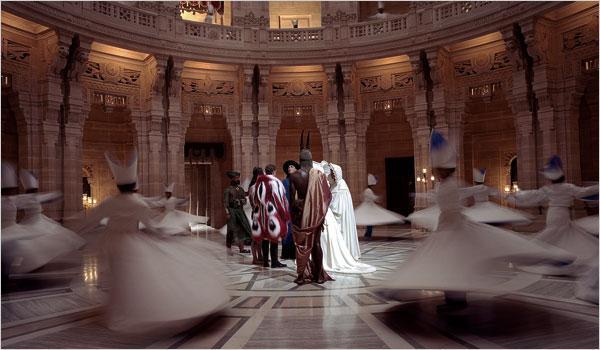 
Stop reading. Just go and see this film. I say this, not for fear of spoiling a plot twist or anything as mundane as that, but because this is such a rare film that you should meet it with an open mind and have an experience unsullied by the summaries, judgements and labels of reviewers, critics, and marketers. Those contexts are unnecessary, they won't make it any better. And you really should see it through your own eyes before you see it through mine. Don't worry about the rest of this page, the next few paragraphs will be here when you get back. Off you pop. Toodle pip...

Still here? I'm not kidding around, go. Ok. Before I go on I'm just going to type some neutral, inconspicuous words here -paint, alphabet, fuse, corkscrew -so that any adjectives that might be inadvertently glanced won't spoil anything for those good souls who took my advice. It's a known concept in web design that when scanning a webpage, readers do so in an 'F' formation. That is, they read the top line, some of second, and the first words of the remaining lines. The further down the page, the less they read. So at this point conventional web wisdom dictates that I've probably lost the browsing eye. And if you've ignored my initial request and read through all this without having seen the film then, ha, I'm glad I've punished you with this inanity that's more befitting an uninspired teenage blogger who mistakes self-commentary for self-awareness.

The Fall is about a six year old girl called Alexandria who, while in hospital with a broken arm in the 1920s, meets a paralysed and heartbroken Hollywood stuntman called Roy, who tells her an epic, fantastical yarn. This story is about an Indian, an ex-slave, an Italian explosives expert, Charles Darwin, a mystic, and a masked bandit who all vow to take murderous revenge on Governor Odious for destroying the things they love. But this shaggy dog story is not just for the bemusement of Alexandria. Roy is weaving the tale for much more sinister motives, and all these elements give the film an unpredictable tone that never tips the audience as to what might happen next.

There's so much wonderment to be had in this film that expectation could tarnish it. Every scene, every frame is so beautiful that your mind bolts at the reality of it. You'll look for CGI but won't ever find it. These locations are so mind-blowingly perfect that they must somehow be faked for film. The tiny island of white sand in a crystal clear ocean, the luscious green garden spiralling into a valley, the castles, the palaces, the town of blue houses -even the 1920s hospital with its deliveries of oranges and blocks of ice is exquisitely rendered. Every location a different utopia, heaven on Earth many times over.

Now, this is one of the reasons why you should see it blank: The Fall was filmed in 18 countries. Just knowing this one fact takes away from the magic. Nonetheless, no one can deny the purity of this film's vision. Just as it's inconceivable to think all these places exist here on Earth, it's equally remarkable that cinema is still capable of eliciting child-like wonderment just through beautifully shot costumes and locations. This is a raw cinematic spectacle in the tradition of silent movies.

But most beautiful and most inconceivable of all is Catinca Untaru, the child who plays Alexandria. She is impossibly cute, her performance is flawless. Never has a child been so convincing. Never mind the wiseass from Home Alone. Somehow, surrounded by cameras, lighting and sound booms, Catinca Untaru gives a completely naturalistic, layered performance. Anyone who's talked to a six year old will recognise how authentic her dialogue and delivery is. As if there wasn't enough smoke billowing out my ears, just how could this innocent little girl be the emotional heart of such a complex film!?

To review this film is to praise this film, and extreme opinions often cause scepticism. So hopefully you took me seriously at the beginning and saw this film free from corrupting expectations. The Fall may not be a perfect film but it is unique and special enough to warrant some reverence beyond the usual Hollywood multiplex fodder.

Enemies of the People