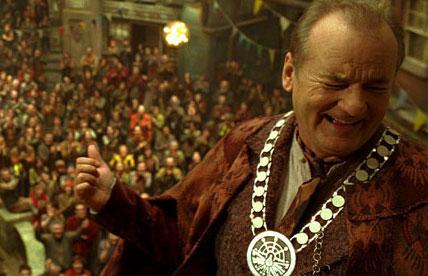 
The ever popular process of translating a successful children’s book into something worth viewing on celluloid does not appear to be as easy as it may seem. An exciting story and a built-in audience does not necessarily a good film make.

For example, however many millions Harry Potter makes at the box office, there is no denying that none of the films to date have managed to capture the truly magical essence of the books. But for anyone who can’t quite hold on to their broom sticks in anticipation for the new Potter (you’ll be waiting until July 2009 for that by the way) then City Of Ember, the film version of Jeanne Duprau’s novel maybe right for you…or maybe not.

Doon (Harry Treadaway) and Lina (Saoirse Ronan) are two teenagers who live in Ember, a city that lies deep under the ground. Set up by the mysterious “Builders” to protect its inhabitants from the rest of the world. Ember is lit and powered by a huge generator. When it appears that the generator is failing, Doon and Lina start to investigate the possibility that there is life outside the City Of Ember and become determined to solve the clues left by The Builders.

Despite the fact that Duprau’s story never reached the same dizzy heights as Ms. Rowling’s, City Of Ember certainly has a lot going for it. The epic set designs are really a sight to behold. While the whole film is set under ground, there is nothing dingy about what is presented to us on screen (aside from a few underground tunnels.) Ember is presented to the audience as a rich and prosperous city, with busy, bustling streets, beautiful buildings and colourful characters. It is all presented in a sumptuous manner and there has clearly been no expense spared on the CGI used to make Ember seem like a place that people could actually inhabit. In the same way that many children’s films do, you get a warm, fuzzy feeling, almost like looking into a roaring fire place, every time you see a shot of the city.

The sterling cast presented to us is also hard to ignore. Somewhat surprisingly, many a famous face pops up although few were used to advertise the film at all. While Doon and Lina are played by relative unknowns (Saoirse Ronan was Oscar nominated for her role in Atonement but it’s fair to say Keira Knightley and her green dress stole the show from her there) many of the other actors will appear familiar. Tim Robbins, Bill Murray, Liz Smith, Mackenzie Crooke (aka Gareth from The Office) and Toby Jones all make appearances and add to the well made feel of the film.

Sadly though, despite the fact that the film is well made and looks great, there is one huge flaw. And that is the story. Like countless books turned films, the writers appear to presume that the audience will have read the book. And if you have not done this (like I hadn’t) then there are huge gaps in the plot. It is never clearly explained why all these people are living underground. We know that Ember will soon collapse but we don’t know why. We don’t know why it is just two teenagers who are keen to escape, not the whole city. And because of all this, it is really quite difficult to care what happens to the inhabitants. The ending does nothing to answer these questions and the abruptness with which the film finishes will leave many feeling rather unsatisfied.

So if a good-looking, well-acted film is what you are after then grab your children/grandchildren/nieces/nephews and take them for an afternoon treat.  But if it’s real adventure you’re after, you’d better get Harry Potter out for a re-read.

The creature and the sovereign self

Grey Wisdom: not quite the last word on religious pluralism
In the beginning…
Laudato si’: a Seismic Event in Dialogue between the Catholic Church and Ecology
‘Take, Lord, and receive’: Nostalgia, truthful memory and the Great War
The breath of God: Coronavirus and theodicy