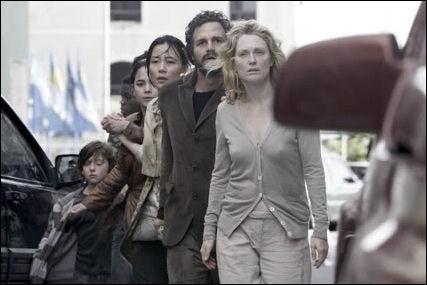 
Is agnosia something related to agnosticism? A flighty and slightly drunk wife (Julianne Moore) puts such a question to her ophthalmologist husband (Mark Ruffalo), who examines the first person to be inflicted with a strange case of blindness. The doctor is confused by the question for a moment before realising that his wife is asking an etymological question. The doctor had mentioned the case to his wife, wondering if the patient might have had a case of agnosia which, the doctor explains, is a neurological malfunction that causes the afflicted to fail to recognise standard objects, despite having fully functioning sense organs. Perhaps his wife had an insight in her question that the doctor failed to recognise.

The following sequence of events in Blindness, based on a book and thought experiment by the Nobel prize-winning Portuguese novelist Jose Saranago and brought to the big screen by the Brazilian director Fernando Mereilles (of the glorious and gritty favela gangster movie City of God), follows the downward spiral that doomsayers predict for our faith-lacking, secular culture. The mysterious blindness is actually some sort of contagious disease and is passed on from stranger to stranger in a nameless metropolis that is clearly New York. The only person who fails to contract the disease is the ophthalmologist’s wife, and when her husband is taken into quarantine, she pretends to be similarly afflicted. However, as the quarantine becomes increasingly filled with scared, depressed and angry sufferers, necessities such as food become scarcer and the world outside gradually descends into complete paralysis. As civilisation exponentially breaks down, the nastier characters pounce out of their socially developed shells, and the quarantine descends deeper into a dungeon and finally into a fleshy hell.

All the characters reveal themselves to be deeply flawed, but some manage to capably rise above the barbarian condition, lead by a person of ‘vision’, the doctor‘s wife. Before this eventual, and much-needed, ascent out of the nebulous Hades, much of the film is spent sadistically portraying the sufferers trying to survive through nightmares of starvation, rape and trauma. This chunk of the film excels in Von Trier-style inner shredding, leaving an emotional resonance that makes one emotionally numb and almost physically sick. The effect is clearly powerful, but this disturbing uneasiness is a feeling that filmmakers should not regularly employ.

Blindness belongs to that list of films that can thank protest groups for generating much of their publicity. However, while films like Dogma and Priest fell foul with traditionalist Catholics, Blindness has been criticised by blind activists. The complaint is that the film portrays blind people as animalistic, violent, rapacious, and useless; there are indeed many such characters in the film. However, as is often the case, the protest was unfounded. It is clear that the cause of this “dehumanisation” is not the blindness that inflicts the characters, but the breakdown of civilisation that results. The state of war is a grisly portrayal of a Hobbesian state of nature.

The film’s impact is strengthened by the cinematography and the acting. The imagery employs the artistic effect of chiaroscuro, using stark contrasts of darkness and light to highlight the film’s themes. The irresistibly competent Julianne Moore leads a cast of efficient, understated and naturalistic actors, with a notable cheesy exception in the form of Danny Glover’s disastrously obvious voice over. However, there are scenarios that are particularly psychologically unbelievable, where the effects of trauma seem easily sloughed off, unlike the slightly traumatic effects of this film on the viewer.

The particularly negative and gruesome view of human nature might fit nicely into a developed Augustinian sense of sin. As an expression of this nature, the film is intensely disturbing; one must ask if the interest outweighs the overpowering unpleasantness of the experience. As a film-watching experience, it is much like Mel Gibson’s The Passion of the Christ; a long, bloody, dramatic crucifixion unbalanced by a pathetic, anaemic, and dimly-lit resurrection. Despite the richness of religious symbolism, this is not a movie to be enjoyed but suffered through. I left the cinema staggered by its rabbit-out-of-the-hat happy ending, as the optimistic light of its conclusion leaves one blind after being buried in so much demoralising darkness.

Do We Still Need St Paul?: A Contemporary Reading of the Apostle