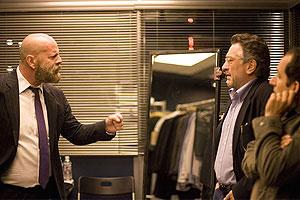 Art Linson has been a Hollywood producer for over thirty years; his CV is spattered with modern classics such as Fight Club, Heat and The Untouchables, and he has written two bestsellers on his experiences in the film industry. The reviews of these books were all in agreement: hysterical and biting, funny and sardonic, hilarious and horrifying. What Just Happened is based on one of these books but is light on laughs and short on insight.

Robert DeNiro plays Ben, a producer who is trying to move on from his ex-wife, get a wild man director to change the ending to his pretentious action film, and convince a fat Bruce Willis to shave his beard off. Absurd, yes. Funny, not really. Satire, no way. What Just Happened is far too affectionate for it to be a scathing indictment of Hollywood's vain and vapid landscape. The problem is that it has all the foolishness of Tinseltown; all the characters are either self-serving cowards, or casual liars, or preening selfish windbags, but we're are encouraged to like them. Neither an affecting drama nor a searing comedy, its confused tone is its downfall.

Worst of all are the celebrity cameos. Presumably the intention is for these stars to show people they don't take themselves too seriously, that they have a sense of humour, that they're a good sport. But really it's just egotistical of them to think that audiences are so invested in their personas that it'll be outrageously funny to see them doing something out of character. Like newsreaders dancing in drag during Children In Need right through to your boss trying to tell a dirty joke at the Christmas party, it's all just a little bit desperate. Bruce Willis shouts really loudly and pushes over loads of clothes racks; his tantrums are empty of threat or humour. Sean Penn pops up to deliver a crack about wanting a private jet for Cannes because he needs a smoke – I think the joke here is something to do with him being a liberal do-gooder. It's annoying, but the 2008 Most Obnoxious Self-regarding Cameo award remains safe with Tom Cruise's sweary, fat-suited part in Tropic Thunder.

What Just Happened being a film about filmmaking means it’s hard to get absorbed in the story. Everything takes on added meaning. Take producer Ben's entanglement with the Keith Richards-esque director of Fiercely, the film-within-a-film starring Sean Penn. The ending sees the hero's dog get shot dead. The test screening audience is appalled, the studio boss is anxious and Ben must talk the highly-strung director into changing the ending. But it's hard to see why people would be angered by the dog's murder. It's clearly a gritty, violent gangster film. If this was a Disney half-termer and the dog was voiced by Michael J Fox, then it would be a problem. Besides, the dog was shot by thugs, and that's the sort of thing thugs do.

Also, one can't help but wonder if the flashy direction is another level of in-joke. The high speed establishing shots, the close-ups – are these references to other films? When Ben is in Cannes, he's locked in a paused frame – is this a reference to Les Quatre Cents Coups? These tricks certainly don't aid the telling of this story, not even on an aesthetic level. The metatextual approach also dictates the soundtrack. Much of it comes from Ben listening to Fiercely's soundtrack, which itself is made up of soundtracks from other films and pop songs – for example, Ennio Morricone's "Man with a Harmonica" from Once Upon a Time in the West.

If you want a Hollywood with which you can empathise, go for the winning warmth of soft-hearted TV comedy Entourage. If you want a ‘no holds barred’ take on the Hollywood machine, check out Robert Altman’s The Player. But if for some reason you want a confused, amiable, inconsequential take on Hollywood, What Just Happened should satisfy you.

The popularity of pilgrimage