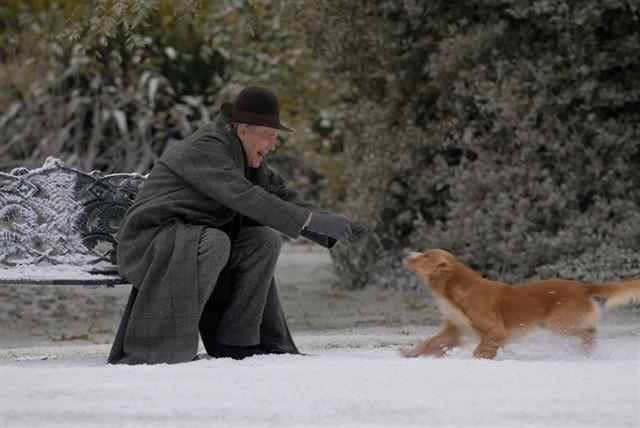 
Dean Spanley is a thoroughly odd film. Based on the book by Edward John Moreton Drax Plunkett, or the 18th Lord Dunsany (as he was to become known by fans led to his work through Tolkein, Yeats and Amory Blaine, the pretentious hero of F.Scott Fitzgerald’s This Side of Paradise), the film throws a whole new set of clothes over that Christmas staple, the healing of a father-son relationship. No football matches or school concerts here: this time the medium is the transmigration of souls and a rare Hungarian wine. And dogs. The overall effect is one of touching humour and bafflement, a rare pair of emotions to purchase from any work of art, let alone from a film showing in between repeated Christmas-party viewings of Mamma Mia!

What is its oddness, its source? There are many authentic routes to break free of the monotony of homogeneity. Sometimes the result is divine; it can be sad; horror is always lingering on the edge of the conversation; and sometimes you can come across something that expands the borders of your imagined world. The weirdness of Dean Spanley (which Dunsany wrote, as with all of his books, whilst sitting on his hat) resides not only in its choice of material but in its awkward rhythm, rolling not unlike a Saturday night between absurdity and pathos with one gulp of imperial Hungarian Tokay. That the viewer leaves the cinema still asking “?” proves, I think, that its oddness is not a cynically positioned rebellion but rather the deliberate product of a very strange mind.

It is a male-centred film – Mrs Brimley is the only woman who does more than smile mysteriously, and even her gender is in doubt after her frustrated rebuke to the chaps – “I am not a lady!” Peter O’Toole as the bigoted, ageing father, Horatio Fisk, carries the weight of male emotional repression (“giving a woman the vote is like giving a gun to a cow”). He clearly relishes getting his voice into sentences packed with the kind of adjectives that once sustained the mighty Empire (stentorian, lambent, olfactory) and into a script heavy with Edwardian aphorisms about colonials, pygmies and Thursdays. He is matched by Jeremy Northam’s Fisk Junior and the two of them conjure up a credible human relationship.

The joy about oddities of this kind is that they wind deep into your skin. The world at first seems to be identical to the way it was, but then you realise that everything has shifted a few degrees to the left or the right and that what before you passed by as mere pixellated background, now causes you to stop and squint and reassess whether what was normal was ever really so. Dean Spanley does not set out to achieve this as a conscious goal, but from the outset, with its arbitrary plotstarter of “Do you believe in the transmigration of souls, Mrs Brimley?” through to its affecting finale, it unfurls a strange and uneven loveliness.

The bread of life: John 6