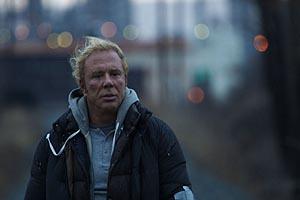 Even before its British release, the hype around The Wrestler proclaimed that this was a parable of redemption. Not so much for the titular hero – Randy The Ram remains a has-been throughout the movie – but for director Darren Aronofsky and star Mickey Rourke. Both men emerged as youthful prodigies, only to descend into self-parody and witless pretention. For Aronofsky, this meant the cinematic nadir of The Fountain, a film that simultaneously demonstrates the director’s ignorance both of dramatic discourse and of philosophical. Rourke, however, decided on a boxing career that led to some nasty beatings.

Like the character he plays, Rourke had a good eighties and a very bad nineties. Since his performance in this role is being tipped for an Oscar, Rourke is getting his shot at redemption. The film’s universe is considerably bleaker. While the script appears to mimic a Rocky-style comeback, it actually follows one man through his failures. He tries to make up with his daughter, but gets high and has casual sex instead of meeting her for dinner. He befriends a stripper, then imagines that a few lap-dances, an uncomfortable date and a kiss imply a relationship. He gets a job in a supermarket, but can’t hack being told what to do, or the fall in his celebrity status.

The script is so focussed on Randy’s journey that it fails to grapple with the other characters: stripper, daughter, boss and fellow wrestlers are all stereotypes, their inconsistent characterisation changing to enhance Randy’s story. And despite his apparent complete lack of self-awareness, Randy is charming and personable. He is good with the local kids, well respected by his fellow professionals – he is even a good shop assistant. His bad behaviour emerges from nowhere, a device to set the plot moving towards his predetermined return to the ring. There seems to be no reason for his downfall, beyond the poignancy of the situation.

At times, there is a sense that Aronofsky is straining to make an important film. In one scene, the stripper, Cassidy (Marisa Tomei), compares Randy to Mel Gibson’s vision of Christ. Thankfully, the movie never follows up the imagery, even if Rourke plays a Man of Sorrows to the hilt. This bland attempt to give the film a greater resonance boldly states a comparison that is for the audience to make, should they so choose. Expressing the absence of any profound engagement with religion or spirituality, the moment is terse and sad. But as an attempt to draw parallels, it is achingly clumsy.

Given the unevenness of the main character, and the undeveloped supporting cast, The Wrestler lacks the depth of an allegory and the power of a realist drama. Aronofsky does capture a rough, grainy texture that suits the melancholic atmosphere, and Rourke’s performance is solid. There are moving scenes: the tragic convention of old, damaged wrestlers; Randy’s date with his daughter; Randy playing himself on an old computer game; and even the horrible, sadomasochistic fight that leads to his heart-attack is tragic as well as brutal.

The refusal to follow a recognisable narrative is admirable, but the final scene, where a stripper who has rejected his romantic advances becomes some kind of moral barometer for Randy’s lifestyle choices, highlights the film’s conflicted intentions. Neither a satisfying symbol for Randy’s life, nor personal enough to be docudrama, The Wrestler is caught between opposing desires, to make big statements and to capture subtle details.