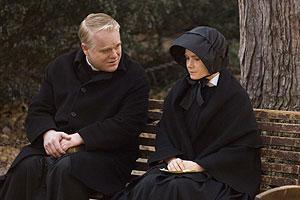 
Is doubt a problem or a gift? Is there a difference between certainty and conviction? When does conviction become certainty and doubt a comfortable disguise for evil?  Each can be rational and articulate. Each can be irrational and silent.  The film Doubt, written and directed by John Patrick Shanley, explores all these aspects and refuses to offer a simple resolution. This makes the film tense and demanding, stimulating and flawed.

Set amid the Catholicism of 1964, the film opens with Father Brendan Flynn (Philip Seymour Hoffman) preaching on the theme of doubt.  He construes it as a hidden grace: it is something we all experience and, in that sense, it creates a sort of community. Yet as the film progresses, the liberal humanity of Fr. Flynn, who teaches at St Nicholas in the Bronx, becomes increasingly ambiguous. Is his concern for Donald Miller, the only black pupil at St. Nicholas, really as sensitive and innocently paternal as it seems?  Donald has a physically abusive father and his place at St Nicholas gives him his only chance of going on to college and perhaps escaping the cycle of poverty and abuse; we can therefore sympathise with and applaud Fr. Flynn’s care. Yet as the extent of Donald’s own dependence on the priest discreetly unfolds, so does our anxiety about Fr. Flynn’s motives. We know that at least one of the other boys rebuffs Father’s interest: is the boy just being characteristically truculent and gauche or does he know something about the approachable and attractive Father?  Cleverly, the film builds up an ambiguous picture. On the glimmering winter surface all is normal and routine, but out of the corner of our eye we can glimpse shadows.  We are led to sympathise with the suspicion of Sr. Aloysius Beauvier (Meryl Streep), the austere Manichean school Principal, that Fr Flynn may be abusing Donald. Her surface is as bright and hard as the well-polished floors of the convent school. Her harsh discipline has a Jansenist pessimism and mistrust about human nature, young or old. Her severe and unflinching regime seems to be constructed to hold the ever-present forces of The Fall in check; neither mercy nor compassion seems to figure in her constant vigilance.  However, she is courageous: in taking the risk of admitting a black pupil; in her determination to run a good school to give poor children a chance of a different future; and in her strange and fierce defence of her pupils against predatory priests or authorities.

What begins as conviction on her part that Flynn is a child abuser, becomes certainty. So begins a mighty struggle between her and Flynn – a religious woman (the oppressed) against the clerical male club (the oppressor) – even though Sr. Aloysius can hardly be seen as a liberating force. Is she protecting the children or her own domain? Though there is no conclusive proof, Flynn finally concedes and resigns from the school.  Has Flynn been using the genuine doubt and humanity of sisters, like Sr. Jane (Amy Adams), to fend off his exposure? Has Sr. Aloysius been using her power – the same sort of power that she despises in the hierarchy of priestly authority – to bully Sr. Jane in to converting her suspicions into testimonial certainty?  Through a series of strong and nuanced performances – especially in the minor characters – Shanley is able to explore the dialectic that emerges and translate it into flesh and blood.  But concepts, even at the hands of accomplished actors, can be rather abstract.

The film betrays the dramatic structure of the play on which it is based. It is built around a continuing dialectic of worlds and personalities: the harsh, hard interiors of the school and the church with their cold, polished, light-reflecting surfaces, and the heavy, soiled, drab and brutal windswept streets of a depressed Bronx.  We contrast the private world of the presbytery with its vulgar indulgence and complacency with the emotionally stripped as well as materially minimalist world of the convent. It is a titanic struggle of forces in a Church that is itself on the verge of momentous change. There is, however, a problem. The film sustains an emotional austerity, even coldness. What can have force and nuance on stage may get lost on screen if it does not seek out the subtlety of tone and the delicacy of the gesture, light and mood that register in the eye of the camera. There is the danger that characters become ciphers for ideas and that the interplay of relationships simply expresses moves in an argument which is working itself out. This leaves the final dénouement of Sr. Aloysius’ own doubts at the moment of her triumph somewhat contrived.

The sympathetic heart of the film rests with two women: Sr. Jane and Mrs Miller (Viola Davis), Donald’s mother. Though their vocations are clearly different, they both possess a gentle strength and capacity for love. Each is caught up in the struggle between doubt and certainty and each has to compromise.  However, what might be seen as weakness is born of love; somehow when all the sound and fury of the titanic clash of forces has faded, it is their humanity and unrecognised courage that lingers. Maybe here we are left with something more enduring than either our certainties or our doubts. Are we on the threshold of some small silver thread of grace?

This serves to highlight the absence at the heart of the film.  Despite all the Catholic ritual and symbols that it deploys, Catholicism as living faith rather than a literary creation is missing. Doubt is so caught up in the dialectic energy generated by the struggle between opposites that it never manages to explore the Catholicism that Sr. Jane and Mrs Miller are living and creating. Such an exploration would take us beyond the easy cinematic and theatrical construct of an institutional church. This is why, for all its reconstruction of Catholic practice, it misses Catholic life; it inhabits a sterile pagan world of punishment and hubris. This may be necessary to make the drama of the ideas work, but it loses the deeper drama that lies with the interplay of certainty and doubt, the drama of grace itself.

The theme of the film obviously touches on the wound of abuse that has so deeply cut into the life of the Church today, but it misses the great theme of the period that it portrays. The writers of that era – Bernanos and Greene to name but two – certainly knew the weakness and sin of the Church but they also understood its faith.