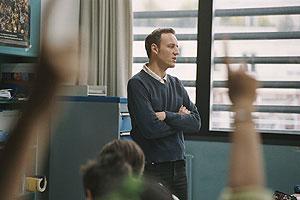 
In 1981 when I first started learning French, some words proved impossible for our teacher to translate.  I remember one afternoon we were reading about Marie-France’s breakfast, listing the various things she consumed:  du chocolat, du café, un croissant.  ‘A what?’, asked the class (but not out loud, Mr Thomas was not that kind of teacher, though he sensed the question).  ‘It’s a croissant, of course’ was his response.  This didn’t help.  I certainly had never seen one, and I suspect neither had the rest of the class, such things had not made it to Welwyn Garden City.  I think he went on to explain that it was ‘a crescent shaped pastry’.  ‘Hmm’ we all thought.  ‘That’s clear, then.’

From then on, along with the language, I continued to learn about all those little differences that make France evocatively mysterious:  those stainless steel street signs (and the old ones that used to have internal illumination), the old PTT telephone boxes, the yellow, post-office vans with their blue arrow-shaped speedy logo, and the different colour and style of the car number plates.

I’ve heard some people bewail the fact that European standardisation seems to be chipping away at some of these details.  But France still is another country, and they certainly do things differently there – clearly so in their schools. Maybe education systems are particular metaphors of national identity, and our differences are thus heightened in the way we teach our children to be citizens: hence, the British system is obsessed with class and status, while in France the ghost of the revolution lingers, not least in the nation’s intellectualism and habits of ideological debate.   When under pressure, the staff-room divides (like the French military) between the disciplinarians and the liberal individualists.  The debate becomes another metaphor for French national identity and that persistent problem of maintaining both liberty and fraternity, made all the more marked in the conformist society that France is often characterised as being.

One striking difference between our two countries occurs during the meeting of an exclusion committee:  they vote on the exclusion, and there is a breath-taking moment when the camera lingers on the transparent Perspex ballot box as it is passed round the room (even if we did such a thing in the UK, it would be in a card-board box hastily improvised for the purpose).  It’s like a revolutionary court of justice, whereas in the UK the process is more similar to a court-martial.  Even more remarkable for a teacher with experience of the urban London classroom is the relative triviality of the offence that precipitates this exclusion:  a flash of anger, and storming out of the room.  Serious, yes, but not a hanging offence in most London schools, surely?

There are other extraordinary things:  no graffiti, none.  Not even a single attempt at a tag, nor the evidence of any having been cleaned off.  And these classrooms are so small.  Clearly, they’ve never even thought of doing drama in them.  And they actually have blackboards (well, they’re green), but this teacher works with CHALK. Chalk!  And It’s when you see him write on the board that the professionals watching know that this man has actually been a teacher – you can just tell.  Thus, a key contribution to the vitality of the performances is that the author of the novel Entre les murs acts a version of himself, in what this reviewer understands to be semi-improvised lessons.

This film has been trailed in the UK as a rather conventional drama about a white, male teacher in an inner city school, who oversteps the mark somewhere – an ill-chosen word or a hand too long on a shoulder, or worse.  Will his life unravel? Will he be condemned or defended by his disadvantaged pupils? All of these questions are an element of the plot of The Class, but the prurient possibilities are (utterly realistically) rejected in favour of a two hour-long study of the insides of a classroom.  For those two hours it is as if one is in that school – the classroom, the staff room, the meetings, the playground.  The consistently claustrophobic cinematography contributes not a little to this sense of intimacy, and the effect of the flattened close-ups and tight mise-en-scène to be in this class, to be entre les murs. Watching the film is thus like reliving the passage of a year in the lives and relationships of these teachers and their pupils.

And so much of those interactions – despite the differences that persist between France and the UK – will be bitterly or deliciously familiar to anyone who’s been in an inner city classroom: the bad jokes that teachers make, the vital effort of communication, the passionate argument (often about things as ridiculous as tenses) the shared jokes, struggles, anger and victories, the tumultuous oratory.  And at the heart of it, communication; communication in the very medium of power that is language.  How many teachers of English have fought – just as the teacher in this film – to teach the notion of ‘register’ to urban children?  It’s a pretty simple point, really:  you cannot talk to your bank manager in the same way as you talk to your friends in the playground, and it will hardly seem an earth-shattering lesson for readers of Thinking Faith – but it makes teachers kick the furniture in private because so many children don’t ever get it.   And the rage at the heart of that frustration is the anger of revolution and progressive change – the urgent demand to change who has power, and the frustration that so often, we fail.