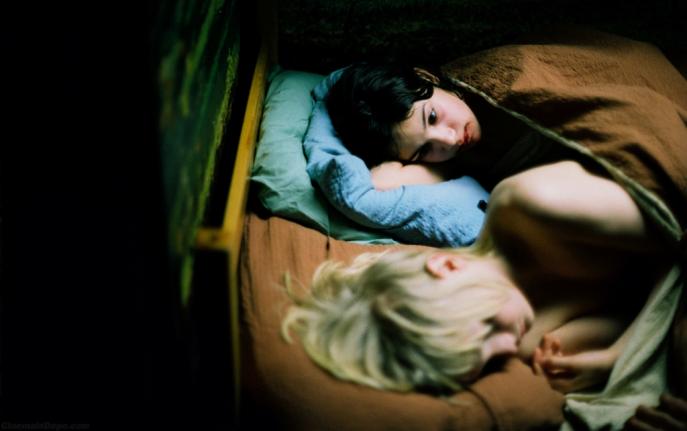 
Every so often a film steps up from its genre and becomes something that touches us at a deeper level than we might have expected. Let the Right One In (Låt den rätte komma in) is one of these films, using the materials of the vampire genre and turning them into a stylish and surprisingly resonant film. It does so in ways very different to films like Interview with the Vampire and the flawed Twilight – here, the loneliness of the vampire is intertwined with the loneliness of children on the edge of adolescence, and our potential for tenderness, sacrifice and violence is evident both in the supernatural and human characters.

The two children at the centre of the story live in a Swedish housing estate caught between snow and night. Surrounding them is a chorus of the estate’s inhabitants. An early scene finds the adults of the estate drinking in a bar – a stranger sits in a corner and is invited over to share in some drink and laughter. It’s an image of the most basic of interactions: the offer of company and an evening of escape from life’s routine. Mirroring these adults, two children meet on the climbing frame in the centre of the estate: Oscar, 12 years old and taking his revenge on a tree that he imagines is his tormentor at school, and the newcomer to the estate, Eli.

Eli’s vampirism is undramatically unfolded by Oscar as their mutual desperation for friendship overcomes her fear and his shyness. His gradual realisation – why the windows of her flat are boarded up with cardboard, why she throws up after trying to eat the chocolate coin he proffers one night – plays out against their deepening friendship. Within her is the knowledge that to allow Oscar to come close is to place him at risk and to open herself up to sharper disappointment once he inevitably leaves her. They encircle each other with the tenderness of the already bruised.

This tenderness reaches its apogee in the sacrifices made or not made by the characters: Eli’s father lives an equally solitary life as he does what is necessary to keep her alive; Eli must choose how to leave Oscar in safety despite the happiness that he brings her. Counter to this is the violence – not just of Eli, whose vampirism is that of an unchosen disease that she must obey or else die – but of the bullies whose tormenting of Oscar becomes more and more intense. The film’s success lies in the juxtaposition of these two elemental human capabilities – of torture and tenderness – and the choices that lie between them. As an audience we are fully involved in the drama: by the violent finale we are swept up by both rivers, demanding revenge and peace at the same time.

Redemption would be too terminal a word for what the film deals with. It’s more similar to the end of Paradise Lost where Adam and Eve, hand in hand, face the newly broken world – the interim process before the final redemption wherein our task is to search and struggle. Oscar and Eli find in each other’s flawed company the love that helps lighten their yoke.  They become emblems of each individual’s struggle to forge out of fallen and flawed materials the holiness demanded of us.

Let the Right One In Official HD Trailer

Afflicting Our Souls: Fasting in the Old Testament