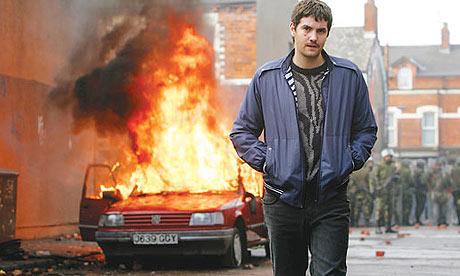 Aside from an absurd sequence when Ben Kingsley appears like a northern Terminator to rescue his beleaguered IRA informant, Fifty Dead Men Walking tries to be a very serious and sincere film. Telling the story of Martin McGartland, it looks at the troubles in Northern Ireland from the perspective of the informant and the security forces, occasionally slipping into bouts of social realism to give a broader political context. Despite some top-notch performances – Jim Sturgess’s McGartland is both winningly naïve and street-smart – the film relies on a gritty, documentary style to place the conflict under sharp scrutiny.

The IRA are clearly the bad guys here: there is comradeship between the members, but the frequent acts of brutality undermine the sporadic speeches about patriotism and freedom. Kingsley’s policeman is caring and heroic, the IRA men are borderline psychotic and the only British brutality is part of a plot to contact McGartland, or a botched counter-attack by those naughty secret services.

Director Kari Skogland refuses to present the film as entertainment, instead exposing the raw, bleak underbelly of Belfast and picturing the city as a fiery warzone. The meetings between Kingsley and Sturgess take place in nightmarish locations and the atmosphere is unrelentingly dark and harsh: the ambience makes the film’s condemnation of conflict far more immediate than even the scenes of torture and raids. Skogland, through tone and setting, makes insightful points about the impact of the battle on the domestic front: McGartland’s attempts to forge some kind of life outside the IRA are pathetic and doomed.

While it is perfectly legitimate for the film to have an angle, the lack of a broader examination of the nature of the conflict, coupled with the deliberately downbeat realism, fails to give the film a deeper resonance or shed much light on the logic of the Irish-British war. If the arguments for the IRA are specious, on-the-hoof appeals to self-determination and community, the British are merely peacekeepers. For a film so intense in tone, this unwillingness to grapple with deeper issues is disappointing.

Most strikingly, the religious aspect of the troubles is almost ignored. Aside from a ghostly presence at funerals, and a single scene inside a church, religion is never identified as a factor in the conflict. When McGartland’s lover questions him about God, he is evasive, as if to point out that spiritual concerns are irrelevant. Given the status of religion in Irish life, this is odd. Skogland prefers to concentrate on the social impetus behind the characters, with money acting as the spur to action rather than conviction. This is a battle fought exclusively on the material level.

With the incredible violence of Watchmen crossing the divide between entertainment and sharp commentary on the myths told by those addicted to violence, Fifty Dead Men feels like a chamber piece, trying to find resonance in a specific time and place. Many of the dialogues have a theatrical feel, with scenes making a specific point or framing characters. The dose of realism is refreshing, and the montage scenes of arrests lend the film an aura of immediacy and pace. Perhaps the lack of a solution or explanation is more authentic than Watchmen’s conclusions about human nature, and while the comic book adaptation manages to hide its extremity behind latex and effects, the violence here is agonisingly realistic.