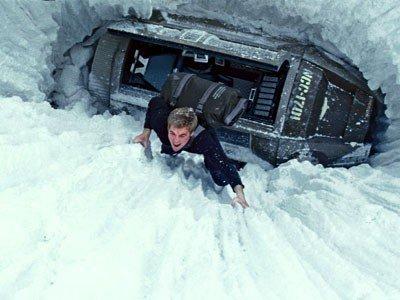 
It’s hard to believe, in the light of the cult status that it’s achieved over more than 40 years and its subsequent spin-offs and films, that the original Star Trek television series was anything but a success when it first aired. It wasn’t until it transferred to cable that it really started attracting attention and became a science fiction phenomenon. Its creator, Gene Roddenberry, confessed privately that in writing the series he intended each episode to work on two levels: first as an exciting adventure story, but also as ‘a morality parable’. Frequently, the characters faced moral dilemmas, as well as aliens and inter-galactic crises. They had to make difficult choices, usually of life or death proportions. Oh, and they had even bigger problems to face as well: the scenery wobbled, the solid ‘rocks’ looked like polystyrene (probably because they were!) and the monsters were either humanoid or looked like blobs of gunge.

So, what was it that rescued Star Trek and led to its phenomenal success, resulting in the making of this latest film? There is little doubt in my mind that the answer is the people – on three levels. Firstly, there was a team behind Star Trek – led by Roddenberry himself – who believed passionately in the concept. The issues tackled in each episode were real issues, either on a personal level or a political one. The second group of people was the fans and followers of Star Trek. They too responded to the way contemporary issues – from Vietnam to sexuality, racism to Communism – were addressed aboard the Starship Enterprise.

But – and this is where I feel Star Trek the film scores most strongly – it is in the seven main characters that the sense of fellowship, friendship, camaraderie, mutual support, devotion and sacrifice is paramount. In the first episode of Star Trek, aired in 1966, those relationships were already being taken for granted to an extent. James T. Kirk was the Captain of the Enterprise; the Vulcan Spock and Dr ‘Bones’ McCoy were First Officer and Doctor respectively. But how did they get there? Where did they come from? What did they really think of each other when they first met? And how were genuine, deep friendships forged between them? The Star Trek film answers most, if not all, of those questions.

Prequels are a difficult genre to pull off – particularly when they relate to a programme like Star Trek, which has a cult following with very high expectations. This film, to my mind, is the prequel to end all prequels. Not bad, considering its writer, Roberto Orci (Mission Impossible III, Transformers, The Legend of Zorro) wasn’t born until 1973. But in his writing, he has managed to achieve something quite exceptional: he has skilfully recreated the original characters, in their words and in their relationships with each other, in an utterly convincing and moving way.

Of course, that is just a starting point: the script is only as good as the person or people who direct it (in this case J.J. Abrams [Lost, Cloverfield]), and the finished product is only as good as the cast that is assembled. I can truthfully say that I couldn’t find a single weak link in any of these elements. The acting and the characterisations are superb: Chris Pine has all the swagger, arrogance and charm of James Tiberius Kirk, as played originally by William Shatner. He is maybe just a little too interested in every long-legged female who passes him, but he is young and playful and, early in the film at least, reminds me of James Dean. Zachary Quinto has likewise mastered the character of Spock down to the slightest flicker of his eyebrow. His impassive Vulcan exterior, with the subtle infusion of his human emotion (from his mother’s side), lead to a complex but endearing character – especially when he meets his older self, Spock Prime, played, of course, by Leonard Nimoy. But in terms of conquering mannerisms, inflections and every other aspect of the original character, I have to reserve my first prize for Karl Urban, looking spookily like John Barrowman, but utterly convincing me that he was a young Doctor Leonard McCoy, originally played by DeForrest Kelley.

Some of those whose characters were quite minor in the original series are more rounded and involved in the film: Uhura (Zoe Saldana), Sulu (John Cho), Chekov (Anton Yelchin), and Scotty (Simon Pegg, doing a very good impersonation of David Tennant as Doctor Who!).  And then, of course, there is the all-important additional character: fans of the original series will spot him immediately, the junior officer who goes on an ‘away mission’ and never returns. Farewell Officer Olson!

Star Trek the movie retains and develops all the best bits of Star Trek, The Original Series. It’s rich in subtle humour. It honours the best of human nature: sacrifice, friendship, compassion. And of course, the goodies win and the baddies … well, are blown to smithereens (I hope that doesn’t spoil the ending for you). Some of the 1960s significance may be lost on 21st century audiences: the fact that the bridge crew included a black woman, an alien (Spock), a Russian (Chekov) and a Japanese helmsman (Sulu) was groundbreaking in its day. The morality message is a little more defused as well, even though the Federation is described as “a peacekeeping, humanitarian armada” and Spock, after the destruction of his home planet, refers to himself as “a member of an endangered species”.

Which generation will it appeal to? Will fans of the original series be upset or delighted? Well, I’m one of those fans and I loved it! Two hours of nostalgia, fine acting, clever directing, spectacular effects, brilliant writing … And what’s more, two hours in the company of ‘old friends’ who, in turn, shared what mattered in their friendships with each other, with me. Subsequent generations of Star Trek fans should have no problem with this film either. After all this was where it all began. And for those who have never been into Star Trek, the film works on a whole range of different levels: human relationships, science fiction, fast-moving adventure, parable. As the Paramount publicity says: The Future Begins …