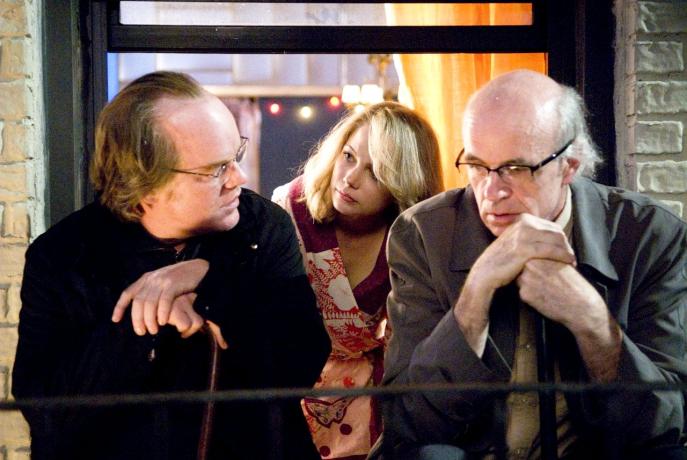 
Some years ago, I shared a flat with a mental health nurse.  It was a successful and useful arrangement.  One of her memorable statements (along with the usual niff-naff about toothpaste and lavatory paper) was that ‘we are all somewhere on the psychotic spectrum’.  Worth thinking about, that.  Indeed, it gave me an idea for an amusing and entertaining icebreaker at parties or adult education workshops: ‘let’s all line up in order of our position on the psychotic spectrum—most psychotic on the left, least on the right’.

In starting with this anecdote about psychosis, designed to hook the reader into what will become a review of a complex film, I have deployed a synecdoche:  a figure of speech in which a part stands for a whole (in this case, the detail of psychosis stands for the whole of Synecdoche, New York).  The key to the idea of the synecdoche, I suspect, is that it gives the reader the power to slice up a complex text, like a film, select their favourite detail, and create a reading on the basis of that single element.  Kaufman, who could be accused of pretension and excessive complexity here, seems in the very title of the film to be asking us to slice it up, pick our chosen fragment and build meaning out of it.  After all, isn’t that what we do with life, select the details we can grasp out of the vastness of existence and construct our own sense of purpose out of it all?

So, when you see this piece, I suspect you and your companion will come away with substantially varying interpretations, because Kaufman (Magnolia, Being John Malkovich, Variation) has created the film in such a way as to let that happen.  And whatever detail you pick will tell your friends a lot about you.  So let me return to my chosen theme of psychosis – or more particularly the idea that the boundary between the imagined and the real can at times become blurry.

Synecdoche, New York starts with a conventionally told study of a collapsing marriage and steadily becomes more and more psychotic, as the drama blurs the fuzzy boundary between the real and the imaginary.  Caden Cotard (Philip Seymour Hoffman) is unhappily married to artist Adele Lack (Catherine Keener).  Their four-year old daughter, Olive, lives largely ignored by both of them, as they sit in their own mess and distress.  Cotard is a theatre director, and seemingly (whatever praise the imaginary critics are reported to give of his work) a rather conventional one.  The first fifteen minutes of the film show his faltering attempts at directing Death of a Salesman, Arthur Miller’s 1949 play about Willy Loman’s descentfrom struggling purpose to utter failure in the hands of the capitalist system.  Here is another of the numerous synecdoches – Death of a Salesman deals with a middle-aged man’s failure, and his ever-decreasing grip on reality:  it is a part which represents a whole.

This figure of the play within a play also serves to raise a key question about the rôle of realism in performance art.  Miller’s Death of a Salesman is written in such a way as to demand the realist conventions of theatre in the 1940s and 50s, even as the fleeting moments of its central character’s psychosis challenge that representation of reality.  So, even though he probably has no alternative, it seems odd, disappointing, passé, to see Caden Cotard, a serious contemporary director, struggling with a clunky, over-designed ‘realistic’ set.  This is one of the things his wife slates him for – his suburban predictability and lack of feeling.  What changes him into, apparently, a great artist, is when he wins funding that enables him to put himself into his work – literally. He chooses to put on a play of his life.  His daily life, as it is currently lived.

The majority of the film thus becomes an exploration of what might happen if an actor were to attempt to do this, to put on a performance of their whole life.  You start, naturally, by casting yourself, but because you watch yourself acting, you then have to cast another actor to play you-directing-you; and then you have a conversation with someone at the bus-stop, so they need to be put in, and then you hear through the walls an argument between the neighbours, so they both need casting… and so on.  Similarly, the set needs to get ever more complex, with whole buildings reconstructed, including the walls and the lifts.  In this hyper-realism, the play becomes not un-performable, but unwatchable:  unwatchable not because it is not entertaining, but because it is not staged, because no-one watches real life as if it were theatre­ – there are walls, doors and social proprieties in the way.  Theatre is a necessary synecdoche of real life, because there is just too much of real life actually to perform.

Possibly, this is the point:  the whole is ungraspable.  We can attempt to understand the whole, to attempt to have the mind of God, but that way madness lies.  Life cannot be perfectly replicated by any human process, and maybe it can only be understood by taking small fragments around which we construct a human meaning.

A question of forgiveness