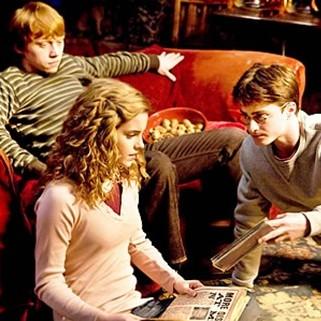 
Harry Potter’s creator – the creative, imaginative and extremely wealthy (thanks to Harry) J.K. Rowling, could never have expected as she embarked upon the concept of the boy wizard, Hogwarts and the Dark Lord that the series would become the unparalleled success it did. And as she sat down to write the opening paragraph of each volume, did she ever think about the enormous pressure there was upon her to produce something at least as exciting as the previous book, to create something that had her readers sitting on the edges of their seats and hungry for the next instalment, to live up to the expectations of the Harry Potter fans who were increasing in number daily around the globe? Yet, time and time again, she pulled it out of the hat.

Sadly, the latest film – Harry Potter and the Half-Blood Prince – fails dismally to deliver for me. It has some great special effects, admittedly: the destruction of the Millennium Bridge across the Thames – widely circulated before the film opened – is spectacular. But even the games of Quidditch do not seem to offer anything more than we have seen in previous episodes. And there are very few edge-of-your-seat moments with mythical monsters or magical effects that make you gasp and wonder how they did that.

Harry Potter and the Half-Blood Prince suffers from the absence of many of the quirky, endearing elements that the previous films and the original books contained. There is no Nearly Headless Nick (John Cleese); Draco Malfoy’s sidekicks are nowhere to be seen; Julie Walters’ scenes as Mrs Weasley are minimal; the moving staircase at Hogwarts seems consigned to the history books; and even Rubeus Hagrid (Robbie Coltrane) is little more than a secondary role. Aside from these specific missing features, the film lacks the depth and warmth of the book, the humour and the richness of human relationships that are conveyed so well in the detail of J.K. Rowling’s writing. As soon as I got home from the cinema, I flicked through my copy of Harry Potter and the Half-Blood Prince; and on almost every page there was some dialogue or incident that was vivid and enlightening and rich in imagery, that the film adaptation sadly lacked.

Director David Yates and screenwriter Steve Kloves seem to have chosen instead to focus on the development of the teenage characters. As the Vatican newspaper, L’Osservatore Romano rightly observed this week, their relationships are portrayed sensitively and, at times, movingly. The portrayal of the awkwardness of youngsters becoming aware of the opposite sex, the quest for affection (albeit with the help of Professor Slughorn’s love potions) and the confused feelings that physical attraction bring, are some of the delights of the film. But this recurrent theme seems to diminish the central premises of our interest in the Harry Potter story: the magic, the drama and the battle between good and evil. At one point, Professor Dumbledore (Michael Gambon) makes a passing reference to the conflict between the light and the darkness, with just a hint of John 1: 5. But such imagery seems far more implicit than explicit. In a similar way, the fact that Harry’s mother, Lily, had sacrificed herself in order to save her son is mentioned, but it hardly forms a central theme of the film. And Voldermort’s quest for immortality through the seven Dark Magic devices or horcruxes will, one hopes, be explored further in the finale.

There is, however, one tantalising component that augers well for the culmination of the Harry Potter series on film: Harry’s emergence as ‘the Chosen One’. The world, existence as we know it, is threatened by forces that are evil and menacing and extremely powerful. We are left in no doubt that the ultimate battle between good and evil, darkness and light, is about to be played out. The answer lies not with the professors of Hogwarts or the muggles, but in the boy wizard, Harry Potter – the Chosen One – and his loyal friends, Hermione Granger and Ron Weasley (Emma Watson and Rupert Grint respectively). In Harry Potter and the Half-Blood Prince, Harry reaches that realisation: he, ultimately, is the one who has to go into battle; the only alternative is to leave the human race to despair and destruction. Harry (Daniel Radcliffe) beams as he announces to Hermione that he is the Chosen One; she responds by hitting him on the head playfully. But deep down, we too put our faith and trust and hope in him. The Dark Lord must not be victorious. Despite the setbacks and tragedies and uncertainties, the quest is too big, too important. The light will overcome the darkness – it must! And hopefully, when it does, in the final instalments of the Harry Potter saga, the teenagers’ hormones won’t get in the way of a truly dramatic story.