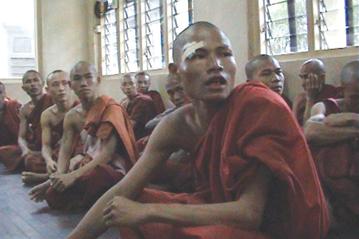 ‘Film them – film them all.’ A finger points the camera towards the top of a range of towerblocks, where heads and flags protrude as on a tree-lined horizon. It is Rangoon, Burma, in the late months of 2007, and the streets are filled with people. Burma VJ documents the efforts of a group of video journalists to record the uprisings against the military regime that has controlled the country since 1962. Rangoon became the epicentre of these protests and what reporting there was of the protests was brought to the rest of the world via the team of undercover journalists whose story the film tells. Due to the risks involved (reporters and protesters alike faced imprisonment, torture and death) the film is the product of an international effort spanning Burma, Denmark and Thailand. ‘Joshua’, exiled in Thailand and coordinating the movements of his friends in Rangoon, is our conduit of experience and ends the film making his way across the mountains back into Burma.

Stylised hand-held camera work has become in vogue for horror films or thrillers in order to convey a sense of uncontrolled risk, but the shaking lenses and hurried refocusing in Burma VJ aren’t the product of artistic intent but of survival. Clutching camcorders and small digital cameras between the arm and the torso means that the illegal act of recording can be done as secretly as possible. The first shot of the film is of an old man standing outside an official building and raising a sign with words of protest carefully drawn. From a car window the camera focuses on him. Within a few minutes a van pulls up and three shirted men simply take the sign from his hands and lift him into the back of the van. It pulls away and the only memory that he was there is the recording on the camera. This need to record and tell the truth is one of the few forms of protest possible in such a controlling state. It reminds one how privileged the media is in Britain to be able to enjoy the freedom that it does, and that for all its failings we are fortunate to have such a counterbalance to power.

Running throughout the film as an artery are the crimson robes of Rangoon’s Buddhist monks. What marked out the protests of 2007 was the involvement not just of students (who had led the protests in the late ‘80s) but the ranks of religious. As a group who enjoyed the paternalism of the state and a revered position in society, it was a seismic shift to see the monks lead the protests, at one point forming a barricade to protect the reporters from state thugs. Their chant of freedom – from distress, fear and poverty – was taken up by the ranks of civilians who filled the towerblocks and marched with the monks towards the house where Aung San Suu Kyi is still held under house arrest. The reporters’ astonishment that this might be a turning point is matched only by the horror that the army turns on the monks too, ransacking the monastery, ripping off robes and culminating in the body of a monk charred by violence floating facedown in a river. To see a religious congregation display not just intense solidarity with, but leadership of, a mass of disempowered people is nothing short of inspirational. At extreme personal cost the monks made public where they stood in the face of evil.

In a situation like this tiny battles won can seem eclipsed by the longer war. In one sense, nothing changed in Burma: the military rule just as strongly, the people’s chosen leader Aung San Suu Kyi is still imprisoned in her own home, and the poorest still suffer the worst in the face of disasters such as the 2008 cyclone that destroyed or damaged nearly half of all the country’s buildings. The initials ‘VJ’ in Europe carry with them the connotation of victory: Burma VJ is a film forged from courage and it is a victory that against such opposition it has been made. Watching it is a form of witness – a small way to honour those who died and those who continue to suffer.