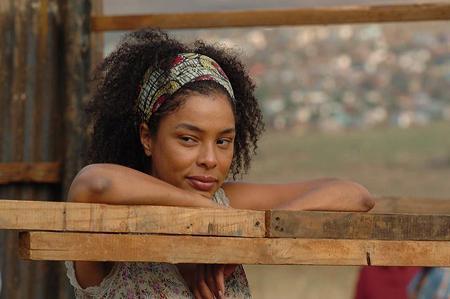 The ‘mechanics of power’ (the term is Bessie Head’s) often mix together the absurd and the horrific. A small black girl in 1950s South Africa with a pencil stuck in her hair is ordered to shake her head to see if her curls are tight enough to prevent it from falling out; a ruler measures the width of her forehead; the doctor asks her to turn and notes down the ratio of hips to waist. The girl is Sandra Laing, whose true story Skin tells – the black girl born to white Afrikaner parents under apartheid.

The Laings treat this genetic surprise as a burden to be faced through prayer and mutual support. Sandra is bullied at school before being expelled – the scenes of her re-classification from white to coloured and from coloured back to white are greeted by her father with the stubbornness that has served him well in the upkeep of his smallholding. Like the system that has imbedded itself within him, he doesn’t deal well with complexities, nor things that escape from their designated box. At this distance the audience felt removed enough to laugh at his rabid declarations of Sandra’s whiteness.

Stories such as Skin preclude criticism to an extent. The weight of suffering that has been the midwife to such a tale asks a certain silence in response. However, the film itself, despite the absorbing human struggle, misses out the real point of interest, which is the figure of Sandra’s racist, loving father. His love for his daughter and family meets as its counterpoint his love for what he sees as the plight of the minority white population in South Africa. In the face of public ridicule he continues to trust his wife that Sandra is his child, although through the eyes of his contemporaries the way that he grabs onto the theory that the family might have black genes in its ancestry, and that these genes had re-emerged in his daughter, seems nothing more than the desperate attempt of a cuckold to retain some dignity. Instead the film leaves him as increasingly monstrous and less human.

Framed in flashback by the elections in 1994, Skin’s ending gives the sense that the removal of apartheid has made everything ok: Sandra has made her peace with her mother and is living with her two children in a country that is no longer insane. By shying away from the unlovely figure of her father her story risks becoming, through Skin, a Based- On-A-True-Story Lifestyle TV. There are even clear echoes of the Romeo and Juliet archetype in Sandra’s romance and marriage to Petrus, a black farmer: their ‘balcony scene’ takes place as Sandra crawls out of a toilet window of a whites-only restaurant. Bessie Head, invoked at the beginning of this review, was another victim of apartheid: her Scottish mother incarcerated in a mental asylum for her relationship with Bessie’s father, an African servant. Her novels present a more mature telling of the struggle not to be a victim in the face of evils, where healing comes about through bigger forces than political freedom.

This is not to deny the emotive force of Skin. Little needs to be done to embellish the facts in order to involve the audience in the drama of Sandra’s life. It’s hardly a snapshot of modern South Africa (in fact the film leaps silently from the 1994 election to the present day by way of brightly coloured balloons sailing over the ‘Rainbow Nation’) but it is a song about one individual’s survival against a conspiracy of biology and bureaucracy.