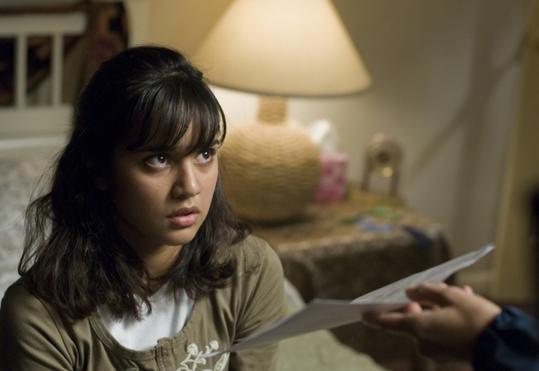 The Society of Jesus’ 35th General Congregation’s Decree on Challenges to Our Mission Today: Sent to the Frontiers prescribes a mission of reconciliation: reconciliation with God, with one another and with creation. On the decree’s list of Global Preferences, is migration and refugees: ‘…massive movements of people create great suffering among millions…this congregation reaffirms that attending to the needs of migrants, including refugees, internally displaced and trafficked people, continue to be an apostolic preference of the Society.’

These words recurred in my mind as I watched Crossing Over. The film portrays the struggles that migrants experience in their attempts to ‘cross-over’ into the land of milk and honey – the dearly beloved United States of you-know-where. These struggles are not portrayed solely from the point of view of those who suffer, but also from the point of view of the few good people who try to help them and so, in turn, sometimes suffer too. The plot is multi-layered, and as the film cuts between storylines, there are aerial shots of America’s highways and spaghetti junctions – a representation of the migrants’ journey, and perhaps also of the interconnectedness of people’s lives.

Harrison Ford stars as Max Brogan, an immigration officer in California, whose job consists of raiding places believed to be harbouring illegal migrants. Despite what his job entails, he displays concern for the people he and his squad take into custody. Max’s partner, Hamid is an Iranian American, dedicated to his job, and as he awaits his father’s naturalisation he also has to put up with the – what he would call non-conforming – behaviour of his rebellious sister, Zahra. Zahra’s boyfriend, Javier is involved in a fraudulent green card business. Claire is one of Javier’s customers and when her documents seem to be taking longer than promised, she bumps into Cole, a green card supervisor who promises her that he can get her a card if she does favours for him. Cole’s wife, Denise, is a defence lawyer trying to find a family for an orphaned migrant, and assisting in the deportation process of a young girl accused of having connections to terrorism and Jihad. While the stories are no laughing matter, the film still manages to portray the lighter side of the whole process of migration. Although there were no scenes of lines of people at the immigration desk at an airport, I found myself thinking of such lines and the seemingly stupid questions one has to answer when in them.

As the film shows the agonies that come with movements of people, it continuously stresses the importance of attending to the needs of migrants. The film also manages to portray reconciliation and we discover that even in some of the ‘bad guys’ there is still an underlying current of hope, goodness and love. I talk particularly of Claire and Cole’s story. Claire is at a crossroads: one road leads her up the aisle to marry an American in order to get her green card; the other road takes down Cole’s path, doing whatever he wants, whenever he wants for two months. She chooses the latter way since she has a boyfriend and wants to be with him eventually without ever having to worry about being deported or taken advantage of again. However, Claire’s boyfriend, who is also a migrant, comes to find out what she has been doing in order to get her green card and loses his temper. Even in her distress, and in her recognition of his anguish in discovering the truth, she maintains her calm but walks out on him. Cole then decides that he cannot continue with what he has been doing and wants to start anew with her. He invites Claire for a cup of coffee but perhaps since any change could only make things worse for her, she tells him she’s not looking to renegotiate. She tells him that whenever she is with him she switches off; she is crossing over not a geographical border, but a moral one. On Cole’s part, there is conversion, as despite her admitting all of this to him, he tells her that her green card will be in the mail and that she won’t hear from him again.

After this incident, the next time we see Cole and Claire is when he gets arrested and she is being escorted to the departure gate at LAX. It is a shame that the interim events are not shown– perhaps it is just to spare us the details – however, we do learn that she reported him and chose to be deported. I see her decision as the continuation of the process of conversion, a re-crossing over the moral border as she ponders the question: ‘Is doing all of this really worth it? For a green card?’

While world leaders continue to wax lyrical about globalisation, the film shows us the various barriers that prompt one to ask questions about globalisation: the geographical barrier, the race barrier, the creed barrier, and the barriers that make people commit immoral acts, to name a few. These same barriers contribute to creating what the General Congregation refers to in the decree mentioned above as a ‘fragmented and divided world’. The film ends but the suffering continues, as does our hope that there will be more reconciliation and more conversion, and that more saviours such as Max and Denise will emerge.

‘Let him Easter in us’

The values of Catholic education

Spiritual and Religious: The Benefits of Being Both
Fraternity in faith: a vision of a future peace
The Meaning of the Sermon on the Mount
Selected Poems 1976 – 2016
Fr Pedro Arrupe SJ