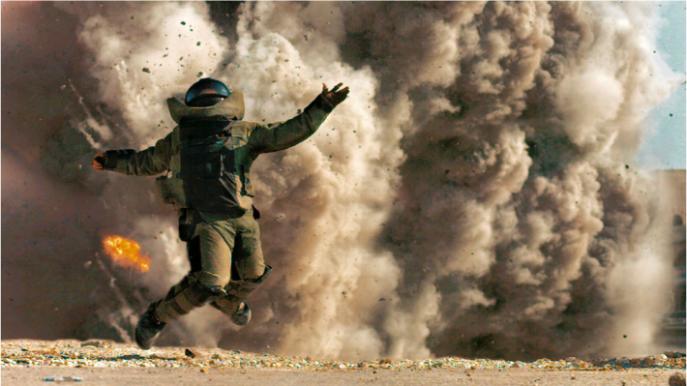 
Sometimes warfare can have elements of unreality about it – the systematisation, organisation and structures of discipline and control can take the rawness out of the process, making it feel like an exercise.  An acquaintance of mine used to swear violently about his time working in the HQ in Basra, comparing unfavourably the boredom of a middle-ranking operations job there to the raw excitement of commanding a counter-battery mortar troop ‘up country’.

This fact – that for many soldiers, a motivation to fight is simply the alleviation of boredom – is the central insight of The Hurt Locker, which explores it through the story of the last few days of a bomb-disposal team’s tour of Iraq.  For some men, ordinary life (clearing the leaves out of the gutters, practising your scales, attending the inordinate tedium of parish council meetings) is just not enough.  As a Company Sergeant Major once said to me, ‘it’s the best fun you can have with your clothes on, sir: kicking in the back doors of someone’s house’.

This insight comes with some compassionate and compelling realism: Jordan (where the on-location sequences were filmed) was made to look convincingly like Iraq (though the piles of litter might seem perhaps a little too artfully scattered), the dialogue is realistic, the portrayal of infantry tactics is convincing.  We see the gruesome reality of insurgency warfare (the booby-trapped corpses, the ruthless use of civilians, even aspects of the insurgents’ surveillance tactics).  A particularly successful sequence is one where the team come under contact from snipers and have to return fire – though how two engineers happen to be such stunningly good snipers themselves is a question that the plot doesn’t answer.

Which raises other questions.  The problem is that in a film which seems to make a claim to realism, there are limits to its credibility.  Not the least of these is that I suspect that being an expert in bomb-disposal is simply not quite as exciting as it is portrayed to be in The Hurt Locker – the real people have an exciting enough life without the need to take the risks that are suggested as a feature of the protagonist’s life.  Take, for example, an early scene used as the image on the film’s advertising poster.  The central character, Staff Sergeant James, has defused one IED (improvised explosive device), but discovers a secondary – he does this by dragging a chain of seven linked large-calibre artillery shells out of the dust.  Part of this is sharply accurate:  roadside bombs in Iraq were often made from material recycled from the Iran-Iraq war, and the country was littered with the detritus of that conflict.  But, and forgive me if this gets a bit technical, I doubt if even the most bored and death-seeking specialist would use James’ preferred method and actually pull on the command wire (that’s the thing that makes them go bang, incidentally) to force bombs out of their hiding-places.

Putting these spotterish questions to one side, cinematographically, The Hurt Locker has a clear sense of visual coherence and style, with some beautiful, filmic moments.  The action sequences are informed by the intimate shaky camera style of good quality US drama TV (Homicide, ER, CSI) and here it seems appropriate given the digitised and videoed nature of post-modern warfare.  Director Kathryn Bigelow also sensibly mixes this style with the standard language of film to create tension and maintain visual interest. My favourite moment is not watching SSgt James defuse a massive car-bomb, but when, back home, he makes his baby son laugh with a jack-in-the-box.  The jack-in-the-box works, of course, because of that moment of delay and expectation, rising tension and then sudden relief in the shock of the clown’s appearance: it is a shocking and striking metaphor for the explosive expert’s compulsion, but one slightly sullied by some heavy-handed explanatory monologue.  The effect was reminiscent of that tacked-on sequence at the end of Psycho: we don’t need to have the clever bits explained to us.

Actually, The Hurt Locker is not really about Iraq, but about the cowboy film, and self-consciously so, I think: the references are there in the score, in the name of the protagonist (SSgt James is a Jesse James, perhaps) and in the way he walks out to take on his enemy, like the good guy in a High Noon shoot-out, doing what a man has to do.  So if there is a fundamental weakness in the film, it is perhaps in its inability to do what good cowboy films have achieved, to touch on the dark choice at the heart of this character – the question of whether what he does is something a man has to do, or something he chooses to do.

The Secret in their Eyes ('El Secreto de sus Ojos')