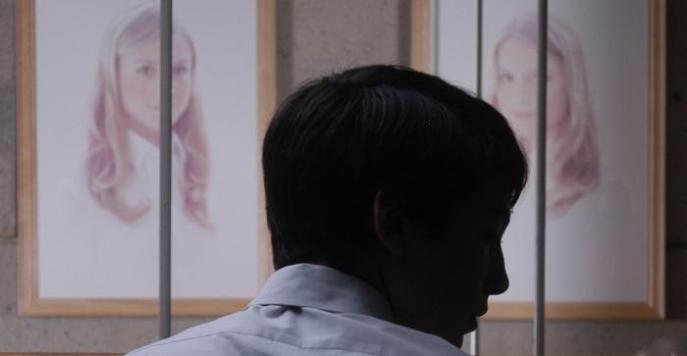 
As settings for movies go, I cannot think of one so perfectly suited to a film’s content and questions as Afterschool’s nameless and faceless exclusive East-Coast prep school.  This, the debut feature from Antonio Campos (following on from his 2005 short Buy It Now), explores the issues experienced by a young teenager thrust by his parents into a world that so differs from the real one yet, ultimately, is so startlingly similar that he cannot seem to find anything to which he can attach himself.

Rob (newcomer Ezra Miller) has not performed the necessary adaptive processes which allow one to flourish in a boarding school environment.  He is quiet, introverted, and is perpetually overlooked and abused by his ‘friends’.  He struggles with the lack of ‘reality’ around him, and (in one of the rare moments where he tells anyone anything about himself) reveals that he likes to watch short clips on the internet, as he puts it, ‘little clips of things that seem real’.  Campos very cleverly reveals something of the nature of schools and growing up here: how one can really struggle to form an identity in such a place.  While so many of Rob’s peers embrace the institution so wholly that they base their identity on their place within it (whether they are popular because they are beautiful, or because they deal drugs), Rob suffers with the contrived and ultimately fake nature of the world that they are being forced to invest in.

The film’s central event occurs as a result of the school’s young and apparently sincere headmaster insisting that every pupil take up an afterschool club or activity.  Rob, with reluctant hope, almost not daring to expect he will stumble across something he enjoys, signs up for the film-making club.  It is while he is blankly filming an empty landing, with sterile bar lights and artless grey carpets, that we see through Rob’s own lens the two most popular girls in the school stumble out of a door into shot.  As they collapse together, one hitting her head sickeningly against the banister, the other moaning and writhing, the audience, still trapped in Rob’s camera, see him walk slowly over to them, calmly sit down and cradle one of the girl’s heads.  He does not call for help, or show any urgency or panic. It’s almost as if, to him, it is not real.  He just sits there as a girl dies in his arms, in a stunned state of silence.

This, a shockingly ‘real’ event, seems on the surface to shake the school to its core.  But it does not.  Campos offers a very bleak and cynical perspective on schools and institutions, and the way humanity protects its interests within structures.  It slowly becomes clear that the shock and tributes paid by people are emotionally fabricated.  Campos very cleverly shows this to the audience through the film’s documenting of Rob’s attempts at making the tribute video he was asked to produce.  Rob interviews countless people, many of whom had never known the girls, but, instead of showing the obvious tributes, he shows bits of film with people pausing, unsure of words.  He omits the girl’s parents’ vocalised thanks to the students and instead shows their silent grief, mother looking straight into the camera, bereft, and father, back turned, staring out the window.  Most shocking of all is what we see of the headmaster in this ‘tribute’ video.  We watch, again from inside Rob’s lens, as he prepares his fake tears for his ‘tearful’ tribute.  Rob, of course, includes this in the final cut.  Most saddening of all of this though, is the headmaster’s reaction to the final video.  He is so terribly scathing to Rob for not masking everyone’s (most notably his own) fakeness and feigned sincerity behind a wall of indulgence and pathos.  His words to Rob rest at the foundation of the subtlety and cleverness of Afterschool’s challenges to society and human behaviour and resound with the audience long after the film is over.  He simply says: ‘That is the worst thing I have ever seen’.  A pause follows, in which the audience’s shock is marred only by grief for Rob and the truthful portrayal of reality.  Then the headmaster says again, almost in disbelief, ‘It didn’t even have music’.  This somewhat breaks up the audience’s horror at the whole situation, and even gleans some chuckles, as Afterschool itself possesses absolutely no music apart, aptly, from the faux-heart rending rendition of Brahms’ lullaby which accompanies the memorial tape put together by the headmaster after Rob’s is scrapped.  In this moment, Campos’ intentions for the film itself to mimic its content are finally clearly alluded to, where it had been merely hinted at before.

Whilst there is no music, there is plenty of sound.  The unsettling hum of computer monitors and bar lights, the relentless monotony of background chatter and recording fuzz paint a picture around the frame.  The characters often exist outside the shot, which often remains completely stationary while characters move in and out of it.  All this serves to alert the viewer to the world that exists around the camera, and to keep us all mindful of the blinkers that cinema inevitably places upon us.  It also divorces the audience somewhat from the emotions occurring in the film.  Everything is portrayed so plainly and without pathos that it seems almost as if none of it is real.  There is no humour or gloom, just a stark view of things as they are, of events occurring without any intrinsic meaning.  Campos indulges in no exaggeration or hyperbole, he deals only in realistic understatement.  This makes Afterschool a very unnerving and unsettling picture.  The audience struggles to form bonds with the characters, something which Campos deliberately does not make easy.  Rob is so quiet and reluctant to let anyone in that the audience’s patience is strained to breaking point.  In one of many counselling sessions usually consisting of lists of questions deflected or avoided, the audience are given a rare insight into Rob’s world.  He is asked the councillor’s staple, ‘Does that make you upset?’ to which he immediately, almost hastily, replies ‘No’.  This is the quickest and easiest response Rob gives in the entire film, and it echoes the feeling Campos creates in the audience.  Watching the most stark and cynical portrayal of a young human’s world, the audience struggles to feel anything at all.

The film ends in an unnerving, static-laden crescendo that asks a disturbing question about the events surrounding the girls’ death, and as Brahms’ lullaby re-enters the picture as the credits begin to roll, many are left with a strange and lasting unease and detachment.  Afterschool is a very clever film.  It has some valid points to make, and it does so with great subtlety and aplomb.  It leaves its audience with a pervasive feeling of disquiet and detachment, and forces the viewer to attempt to come to terms with how ‘real’ their experiences are in their world.  This, I think, is a question that many avoid asking themselves.