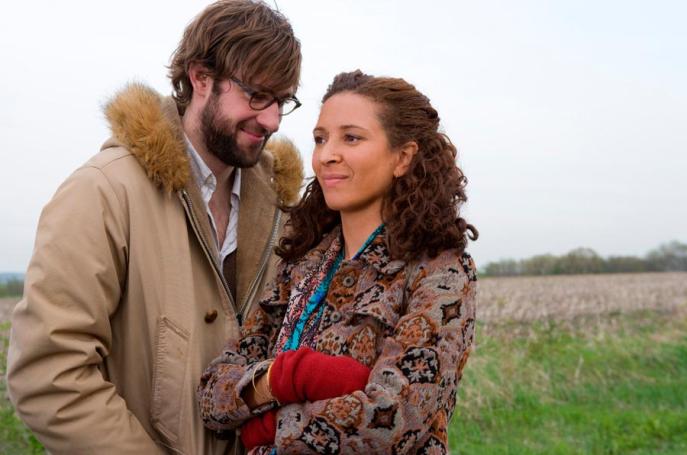 Lives often seem to have built-in thresholds to them, when circumstance and possibility combine to demand self-assessment. These thresholds can bring with them the cauterizing trauma of clearing out the underspaces of our hearts in order to leave the foundations alone and pure, but any pain must always be seen in the light of the love that invokes it. This light radiates from Away We Go, the latest film from Sam Mendes, which follows a couple in their early thirties awaiting their first child as they trek the States to find a place they would want to call home. It’s a waifish and lightly told film riddled with tenderness – none of the usual romantic cruxes of temptations, break-ups and infidelities, but an undramatic affection humming away beneath the action.

Some of this understatement must stem from the closeness its two writers, Dave Eggers and Vendela Vida (d.o.b. 1970/71, married 2003 with two children), have to their subjects. Eggers in particular has become the balladeer of this demographic and its pulse of immaturity and responsibility, shallowness and depth, rootedness and freedom. Burt and Verona Farlander are at the tail-end of this particular part of their youth and preparing themselves for the changes ahead. The writerly touch of their surname hints at romantic escapees but this is the gap year generation grown up into parenthood: the adventures of travel have been replaced by the adventures of family-building. There’s still space for some old travelling beauty: planes, trains and automobiles carrying them through unfolding horizons until they find the place where love says Stop.

Their search for a home leads them into the lives of other married couples.  Here the film dallies with stereotypes: the foul distorted parents who have nurtured bitterness over years; the over-earnest refugees from the world of new spirituality who protect their children from “sugar, separation and strollers”; even the adopted children in the happy family in Montreal represent a kind of Madonna-inspired Gap Kids advert. Eggers and Vida’s script hauls the film back from the edge of platitude. There is enough quality in the humour and a nice juxtaposition of moods to turn what could have been a Friends-style parade of set-pieces into something genuinely moving.

Central to it is the importance of family – of family members past, of the generations and their wishes, siblings, and of the newcomer waiting within Verona. It’s a deep need of the spirit that always finds expression of some sort in every philosophy: something to do with the flow of time and discovering our place within it, where we came from and where we hope to head. The phrase “away we go” sounds like it could be a dismissal but more truly it comes as a cry exhaled at the top of a ride with dips unknown spread out before. The film draws us into that smallest moment before gravity kicks in; its sweetness is to be treasured.

Fidelity Without Fundamentalism: A Dialogue with Tradition