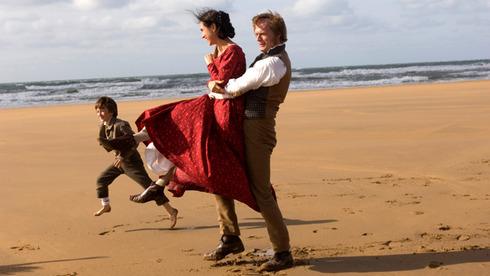 Creation is a paradox. Beautifully filmed and avoiding the usual clichés of costume drama, it is a hagiography of Charles Darwin. It converts his struggle to write The Origin of Species into a personal battle, ending on a note of triumph and dealing sketchily with the moral and social implications of the theory. Religion is given short shrift, represented only by Mrs Darwin and a martinet parson and it dramatises many of the modern conflicts between science and religion in a way that is ahistorical and undermines the rationalist intent of Natural Selection’s strongest advocates.

Although it is reasonable – and dramatically exciting – to pitch Darwin’s theory as a blast of enlightening wisdom against an oppressive society that uses religion as a method of vicious control, it rapidly excludes any notions that Natural Selection can be integrated into a religious world-view. There is also the problem of Darwin’s breakdown. To emphasise his struggle, the film has him hallucinating, talking to ghosts, twitching and moaning: this gives the impression that the book was written by a madman, and his concluding mystical musings fail to site him as the rationalist that his supporters claim.

That his moral doubt and illness are cured by a quick bout of Freudian therapy is unconvincing and historically dubious. Freud might be part of the holy trinity of modern atheism – Nietzsche, the third figure, is appropriated in a throwaway line – but to suggest his talking cure was a common place of medical procedure in Victorian England is dubious.

Ultimately, the film is a remarkable success and an abject failure. As a work of art, it is wonderful, with a strong set of performances and a clear articulation of a dramatic story. Yet in achieving this, it threads Darwin’s life with romanticism and leaves Natural Selection as the product of a specific context and personality. A commendably post-modern notion of scientific theory, perhaps, but not one that neo-Darwinism admires. It is contentious in the same way as The Blind Watchmaker, and offers Natural Selection as an alternative to a brutal religiosity. In allowing Darwin to be an inspirational human rather than a mere icon, it states its claim coherently: the more mythological sequences, such as his turn as Dr Dolittle with a cute orang-utan, muddy the scientific intention.