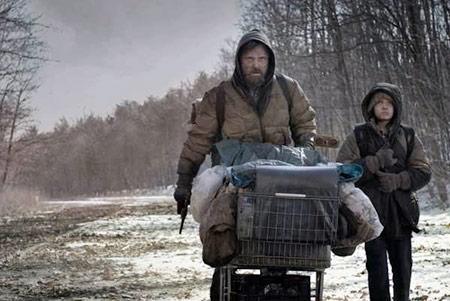 
The Road, John Hillcoat’s long-awaited adaptation of the Cormac McCarthy novel of the same name, is a very powerful film. It follows an unnamed man (Viggo Mortensen) and his son (Kodi Smit-McPhee) on their journey across a post-apocalyptic vision of America. Following a conspicuously unnamed cataclysmic disaster, the free world has been left in a deathly, colourless state, so different to its days of luxury, yet somehow unnervingly similar. Ashen landscapes stretch out as far as man and boy can see (and still further), fields are barren, homes deserted and grey clouds swamp the horizon. Interestingly, Hillcoat chose to forego the use of CGI to create this spent world, but instead filmed at real American locations. Pennsylvania’s abandoned highway, its desolate coalfields, run-down parts of Pittsburgh and most notably, areas of New Orleans yet to recover from Hurricane Katrina were all used to create Hillcoat’s vision of McCarthy’s broken and defeated world.

The main issue this beautifully exhausted picture serves to highlight is the effect of a desolate world on humanity: not just human people, but the concept of humanity. Not many people survive, but there are a collection of hopeless homo sapiens still technically living. The question is, however, that although humans still survive, has humanity died along with all its structures? As the audience is inducted into man and boy’s world, we slowly see that there is not much evidence left of what we would call ‘humanity’. For much of the film the only other life man and boy encounter are bands of people allied only by their desperation, who roam around the dead land searching and hunting other survivors for food. Mortensen’s man is all too aware of this danger, and matches their desperation with his own for the safety of his son, saying at one point to a man who has stumbled across their hiding place, and whose eyes keep drifting to the boy: ‘If you look at my son again, I will kill you.’ He knows what the look in the man’s eye means, what it has come to mean, and it threatens his deepest self to a sickening degree. This knowledge of the horrors that people commit, of the ease with which they could do it to his son, leads to one of the most disturbing yet moving moments of the film. The audience looks on in shock as father teaches son how to kill himself with the last bullet in their pistol and tries tearfully, but with the resolve of a man with one aim left in his existence, to convey to the boy the significant and dire need for him to take such action should the situation arise. The audience are filled with dread at the thought of what horrors must drive a man to such lengths, but soon see what it is that he fears, and identify with his basic nauseating fear for his son.

Journey is another main theme of the film. The father and son travel what the film calls a ‘road’, but the road is, in essence, aimless. The initial idea was to travel south to where, they hope, it will be warmer. However, this aim becomes secondary to the more immediate goal of finding food and avoiding becoming it. Their journey south has no end. Though they say they want to get to the coast in the hope that there might be something there for them, this is essentially just an ideal to which they may harness their hopes, so that they have the strength to keep on walking, to keep on living in a world where they are lost and alone. In this sense, their journey is tied up with their outlook and morality. As the father sees more and more danger and horror, he becomes increasingly fearful for his son and the world in which he has chosen to bring his son up. His wife, the boy’s mother (Charlize Theron), who appears regularly in his dreams, wanted them all to commit suicide together: she couldn’t face bringing up a child in a world so mutilated, but he resisted her. He pleaded with her to survive with them, to try to live where life is both a miracle and a curse, and he made a decision to stay alive with his son while his wife walked out into the winter night, unselfishly leaving them the remaining three bullets, to freeze or starve or worse. The father’s fear fuels his cynicism and malevolence towards all other people. He has someone to protect, he will look out for his own. It is necessary.

The boy, on the other hand, becomes the last beacon of altruism in the world. He wants to share the little food they have with the strangers they meet who aren’t an immediate danger, and, somehow, he seems a little less disturbed by the state of the world than his father. The father is of the old world, he grew up and lived before the end of nearly-all things, but the boy was born into the new world. He knows no different, and he is thankful for what he has. He is not so afflicted by fear and worry as his father, and so he can more easily make the distinction between what they call ‘the good guys’ and ‘the bad guys’. This clear-cut moral affirmation, in a world where morality no longer exists, sets the boy apart from the rest. He is often referred to by his father, and others, as an angel and a miracle, a small piece of wonder in a world without any. It is in him, in his stubborn refusal to allow the ruined world to crush his goodness, and in his delicate and impregnable relationship with his father, that hope and humanity survive.

A film like The Road, which follows two characters so closely, is inevitably tied to the performances of the two lead actors, and neither Mortensen nor Smit-McPhee let the film down. Mortensen’s performance is outstanding, and he portrays a man with nothing left but love and fear with great skill. Equally, Smit-McPhee delivers a performance of great maturity and sensitivity, and their characters’ relationship is believable and moving. This central relationship benefits from a number of fleeting but very accomplished supporting roles, most notably Theron’s loving but beaten mother but also Robert Duvall’s old, world-weary wanderer, Ely. The Road is a very sad film, set in a hopeless world, but strangely it does not lack hope. It is extremely emotionally charged and explores a relationship that nearly everyone can identify with. It indicates that humans are more tied to and reliant upon their world and environment than many realise. Civilisation and society may seem at times to have divorced us from the world, and in a way these things have, but The Road reminds us that all the structures humans have created are fragile, and they rely on the world upon which they are built. Whilst we may no longer live so immediately in the natural world, the lives we have constructed for ourselves crumble in an instant without it.