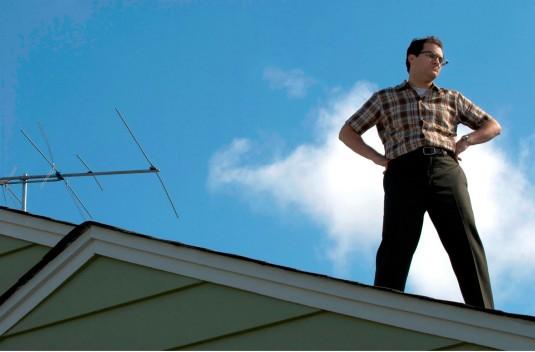 
‘How can I believe in God when just last week I got my tongue caught in the roller of an electric typewriter?’ (Woody Allen)

For A Serious Man, Hollywood’s only real auteurs, the Coen brothers go biblical with a modern take on the Book of Job. That particular book seems to stimulate a lot of artistic reflection, especially from comedic, atheist, Jewish-American filmmakers. I guess the problem of evil is always tricky and hence a fine subject for cinema of a philosophical bent.

The Coens’ Job is Larry Gopnik (Michael Stuhlbarg), a physics professor from the 1960s Midwestern America that the Coens themselves called home. He’s got problems: his wife wants a divorce, his depressed and ill brother is living with him, and his children exemplify the vanity that can be American adolescence. Things get exponentially worse as the film progresses, stumbling from one believably absurd situation to another. So far, so much like Job, but I’m not going to tell you if God relents for him or not, or if we come out with a happy ending.

Unlike the Old Testament, this movie is very funny. The camera frames the mundane with a studied eye, showing things as they really are, which usually turns out to be quite ridiculous. Such an eye helps us see that everyone is an idiot. The wife is unfathomably female, the kids are inane in their misjudgement of real values, and the rabbis… well, they are the most ludicrous people of the bunch.

These rabbis hilariously reflect the need for pastoral skills when dealing with people in crisis. We learn: 1. Don’t make twee remarks about the wonders of God (even if you believe it); 2. Don’t ridicule a person by saying that their questions should not be asked; and 3. Don’t feel that you are too important to deal with the everyday problems of the common man. What emerges clearly is that these rabbis don’t have the answers to the problem of evil; they are all frauds, interested simply in the peace of mind from a regular job.

Though the Coens suggest a world full of evil, no fault can be found the film’s construction. Most brilliant is the short film at the beginning that firmly places this story as a tale of morality set in the Jewish context. Its point is less obvious than those of the stories of Isaac Bashevis Singer, but it is equally evocative. If the moral is what I think it is (evil is invented by superstition) than it seems to be very different to a lot of the rabbinic tales I have read. Still, it engages us with some classic storytelling: a folk tale built for moral lessons, placed firmly in a tradition and a history.

When the story shifts to the sixties, so does the cinematography. The shots of Minnesota suburbs are contemplative, revelling in the aesthetic of the humdrum. The normality of the people is equally brought to life by a largely unknown cast. The showy stars of the Coen brothers’ more recent films have been replaced, meaning that the characters end up being a lot more down-to-earth and personable.

But I am still unsure about the treatment of people in the comedy of the Coens’ film. All the laughs are at somebody else’s expense. Guilty feelings may be assuaged by the knowledge that these characters are fictional, but I am not convinced that this mean-spiritedness is absolutely necessary. However, the theme here is evil, so it would be hard to make a film that was altogether ‘nice’.

What do the Coen brothers believe is the solution to the problem of evil? Well, they do not commit to one answer, but they give you two possibilities, depending on what kind of person you are:

1.If you are an atheist, then all the evil in the world is explained by a lack of a benevolent God.
2.If you are a theist, then God is really quite evil, testing you the whole time and waiting for you to trip up. If (and being human, it’s more likely to be when) you do fail, he finally hammers the nails into your coffin, something he’s been waiting to do for a long time.

It’s a scary conclusion, and the bitter sweetness of this dark comedy tends to get bitterer with prolonged mastication, until one realises that it might be quite poisonous and needs spitting out. The taste, furthermore, turns out to be quite artificial. A world without beauty or love ends up feeling a bit unreal, indeed nightmarish, bringing to our attention that this film is ultimately quite contrived.

A Serious Man is side-splitting entertainment but because it fails to recognise the existence of good, anything it has to say about evil is superficial. While it is a lot of farcical fun, ultimately it is not a convincing reflection of reality and does not really deal with the deeper problems adequately. All I can say is thank heaven for that!

'The thousand forms that move': Alice Oswald as a poet of Lent