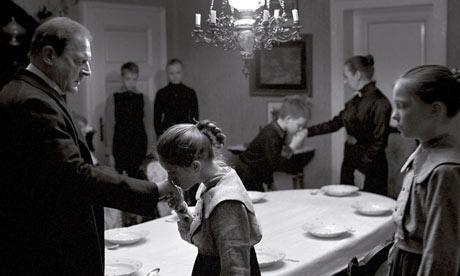 
The White Ribbon is a work of genius. Michael Haneke, director of the horrific Funny Games, uses an early twentieth century German village as an allegory for the way in which the evil that social and religious control hope to dismiss can undermine a community. It becomes clear very quickly that children are behind a series of vicious crimes, which range from assault to arson; yet the adults refuse to notice that their rigorous moral structures are the very impetus for this underhanded revenge.

Haneke slowly reveals the horror behind the respectable facades of the Lutheran minister, the local doctor and the aristocratic baron. By the time the baroness tells her husband that the entire community is driven by malice and envy, mundane interactions between parents and children have exposed both the subtle and obvious cruelties. While the village life is centred round the church, lack of compassion and patriarchal control dominate the social code. It is almost possible to sympathise with the children’s savagery, so oppressive is the atmosphere.

Yet Haneke is too clever for that: the only uncompromised voice in the film, of the local schoolteacher, clearly sees the crimes as monstrous and, without being explicit, the film concentrates on the consequences of each crime to express its cruelty. This is a dark vision, but remarkably clear-sighted, and constructs a comprehensive argument for regimented discipline as the inspiration for anarchic violence.

The eloquent cinematography, evocative of Tarkovsky, and the languid pace prevent The White Ribbon from becoming a generic horror film: unlike in Lars von Trier’s Antichrist, the environment never becomes hostile, and violence is rarely portrayed on-screen. The most extreme brutality features a young lad being dunked in the river and even the children, who travel in a pack and are willing to blind one victim, have nothing sinister about them. They cry, they argue, they question, they confess, yet somehow retain a sincere innocence. Haneke overplays nothing.

Set in Germany, it would be easy to think that Haneke is trying to explain the roots of Nazism. As he points out himself, the implications are far more universal and challenge the assumption that control is the most effective way to create social cohesion. The comparisons with The Crucible are obvious, but there is no drama, no resolution. The First World War begins, the criminals remain free, and the schoolteacher leaves the village. Whatever has been unleashed is not an aberration, but natural and ongoing.

The script is beautifully paced, every performance exquisite. The schoolteacher’s tentative romance with the baron’s nanny is charming, a contrast to the constant savagery of the community and a rare ray of hope. Haneke has a reputation for cinematic sadism – Hidden attempted to invoke a non-specific Western guilt, while Funny Games is deliberately unwatchable. Here, he seduces the viewer into a vision of reality where sin is ever-present, inescapable and sadly explicable.