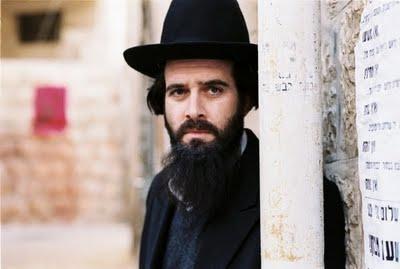 
In the Q&A session following the London International Film Festival screening of Eyes Wide Open, director Haim Tabakman, when asked why he chose, in his debut feature, to explore homosexuality in the orthodox Jewish community in Jerusalem, said, ‘I always wanted to make a science-fiction film’. This was met by the presumptuous chuckles of London’s all-conquering tolerance that somehow belied the significance of the issue. Tabakman was suggesting here, and in his film, that the concept of homosexuality just does not exist in this particular community, so it treats homosexual behaviour as an act completely divorced from any notion of sexual identity or love and that, therefore, its reaction to it is confused, angry and fearful. Whilst this particular cultural misunderstanding may not be so entrenched in most communities in the UK today, it is present. Over and above this, the more general issues of misunderstanding and fear in relation to people who are different, or to a perceived change in the norm are particularly relevant to Britain's social awareness at the moment, especially in the wake of a certain political panel show that attracted 8 million viewers.

Eyes Wide Open is not really about homosexuality in particular. It is a story about forbidden love, and the real harm is caused by adultery, not by homosexuality. Aaron (Zohar Shtrauss) is a kind and caring man, well respected in his community and devoted to his family. But he is not happy. Following the death of his father, with whom he ran the family kosher butchers, Aaron is suffering something of a crisis, as I’m sure many men do when their father dies. He has seen his own mortality in a far clearer light, and therefore his life in a far harsher one. He is now next in line; he is standing alone on his family’s frontline, with his wife and children behind him, with an empty space where his father was in front of him. Now, in his father’s absence he can see what lies ahead. The inevitable sight of demise that his father had shielded him from, now confronts him. He is next.

So when Ezri (Ran Danker), a young man whose troubles seem to have caught up with him and who seems to have nowhere else to go, develops a friendship with him, perhaps Aaron acts with a greater spontaneity than he usually would and he allows himself to act on his lust. Aaron immediately feels great guilt, for disobeying his religion’s purity laws, but more so for betraying his wife, and he struggles with this guilt just as he struggles with his lust. He does, however, find help in the Torah and in his Rabbi’s teachings. ‘Even he who sins must not despair’, Rabbi Vaisben says, ‘God will always give him another challenge. And if he overcomes it, even his past failure will be a merit.’ This open door to atonement and forgiveness is what Aaron takes solace in, and here Tabakman draws a clear line between religion’s response to what is forbidden, and people’s response. Judaism, whilst viewing both adultery and homosexuality as sins, offers ways back for willing people, and no matter how many times someone disobeys a law, they are never condemned. However, this is not the way people act. As Aaron and Ezri’s relationship becomes more speculated upon, a horde of young Torah students launch what can only be described as a campaign against Aaron, threatening him with exile if he does not break contact with Ezri. None of them for one minute consider Aaron or Ezri’s relationship with their religion, with God, or for that matter, with each other. Never does it cross the minds of these men that Aaron and Ezri might be in love. Such a thing does not exist between men. They view Aaron as a man led astray and Ezri as ‘a curse to righteous men’, an evil tempter. In what must be the most beautiful scene in the film, Rabbi Vaisben happens to walk in during one verbal attack and roundly reprimands these ‘students’ and puts them in their place. His anger and shame at their ignorance and malevolence are magnificent, and reinforce the division between community repression and intolerance and Jewish teaching and belief, as he asks them with fierce wisdom, ‘Call yourselves students of scripture?’

However, there are also issues of misunderstanding with the Rabbi’s view of the relationship. He cannot comprehend the fact that Aaron and Ezri are in love. In spite of his outrage at the community’s prejudice and malevolence, he still views Aaron as a good man acting only on lust, and tells him just to stop. As if it could be that simple. When Aaron says to Rabbi Vaisben that he felt dead before he met Ezri, and now he feels alive, the Rabbi is so shocked that he slaps Aaron in the face, as if to try to wake him from a trance. This underlines a more prevalent problem in many communities around the world, an attitude that views homosexual behaviour only as the exercising of lust or riotous self-gratification. Tabakman highlights the flaws in this view, showing that homosexuality is not an act, and is no more divorced from love than heterosexuality.

Eyes Wide Open deals a lot with sin and purification, and seems to ultimately conclude that the malice in the community’s reaction to Aaron and Ezri’s relationship results from misunderstanding, from failing to consider that acts of lust and feelings of love cannot be equated or treated as one. In Aaron and Ezri’s case, their actions are certainly wrong. Aaron has a wife, and he can see the hurt he is causing her. But moral guilt and outrage are too readily transferred from the action of adultery and betrayal to the love between two people. In treating these two things as equal, the community does itself a great disservice. Tabakman said after the film, ‘Judaism knows exactly how to deal with sin’, and he is right. It has probably more experience of dealing with sin historically than any other world religion, and it has systems and teachings in place to do just that. Things like repentance, purification and atonement. But these things, he suggests, struggle to deal with the love between two people. Tabakman also said that Eyes Wide Open has no answers, it only asks questions, and the one that it asks most strongly, and with most feeling, is ‘Can love be sinful?