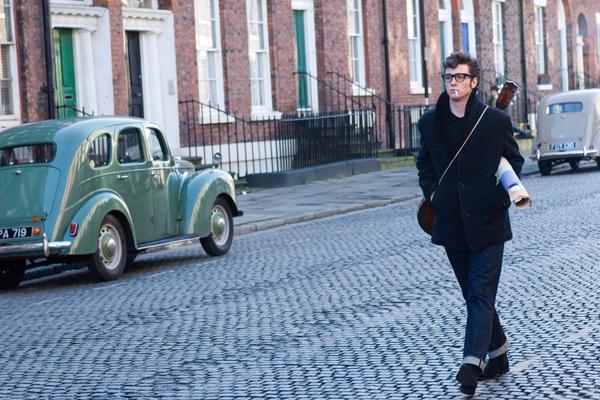 
John Lennon is now enshrined in Beatles’ mythology as the tormented poet: McCartney the twee one who was all about the music. Their friendship, and the tension between Lennon’s  rock’n’roll rebellion and McCartney’s more relaxed attitude has become the driving narrative behind their story, often ignoring the cultural context.

Unsurprisingly, Nowhere Boy feeds this mythology. Lennon’s upbringing was undoubtedly difficult, and his final resolution of the conflict between his biological mother and the aunt who raised him becomes the dramatic climax of the film. For all the concentration on Lennon’s formative identity, there is little sense of him as a rounded human: there is more than a hint of magical charisma in the way that he brings the warring sisters together at the end, a saintly charismatic that is not portrayed in the rest of the film, where he is a boozing, libidinous anti-hero, albeit one with considerable charm, sensitivity and enthusiasm.

There is a whistle-stop tour of Lennon’s  influences- learning the banjo at his mother’s house, the rebellion at school, the first encounters with the blues, the local following for his first band, the fateful meeting with McCartney. Thankfully, all of these are mere signifiers, expected but dealt with abruptly, leaving the film time to explore some of the issues that created Lennon’s  personality. The film is at its strongest when it is not about the birth of a legend, but exploring adolescent confusion and the specific circumstances of his childhood.

Unsurprisingly for a film directed by a visual artist, there are surreal dream interludes, and much of the tension comes from the slow unfurling of significant moments: the confrontation between mother and aunt finally explains the images of Lennon as a small boy, and the frightening flashes of an abandoned mother crying behind a glass door. If the serial adultery and marital insecurity that damages the mother are more familiar in contemporary times as the stuff of daytime television, Nowhere Boy nicely establishes the 1950s’ conservatism, and it is the occult nature of the situation that ultimately torments Lennon. Hints at mental illness, the pathology of everyday life, the condemnation of mother by aunt: all of this build up the pressure, until the teenage Lennon becomes a heavy drinking delinquent.

This sympathy and understanding is the film’s most powerful strand: the acute references to Liverpool and its importance for The Beatle’s song writing are less interesting. The performances are consistently solid, and the atmosphere conjures up a forbidden world of musical revolution away from suburbia in some icon moments: it is almost possible to forget that this is a biopic of a famous musician, and captures a society poised on the brink of momentous change.

The script is surprisingly even handed: despite moments of tyranny, the conservative aunt is given more than enough space to express her opinions and virtues, while the mother, who acts as both comfort and inspiration, is revealed as not necessarily virtuous. Whether this is a realistic analysis of why Lennon became the artist he did is in doubt- it seems rather simplistic to suggest that his music was born from his childhood alone, and the presence of lyrical doodling in his school book is a rather sentimental claim that this chaotic period spurred his later genius. However, as a study in the tensions of growing up in a difficult situation, with conservative suburbia fighting the influx of this new musical culture, it reveals the challenges faced by every generation in their struggle to resolve parental expectation against modern experience.