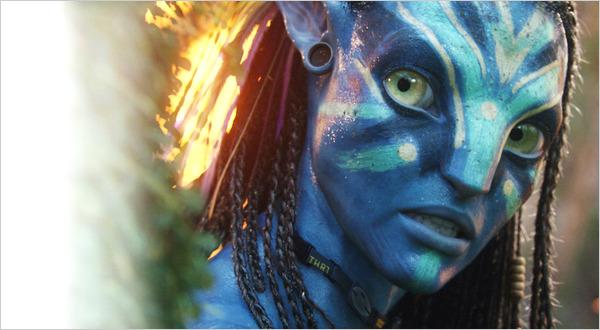 
The word ‘maximalist’ doesn’t really do justice the cinematic efforts of James Cameron and specifically Avatar itself. Before setting foot in the cinema I understood it was the ‘most expensive’ film ever made (£300 million) and at two hours forty minutes it was going to be the sort of film that required tactical toilet breaks. Then there’s the 3-D glasses… and the threat of Avatar re-inventing the science fiction genre or even film itself! It’s as if all preceding cinematic experiences will fall short, forcing directors across the land to bow down to the unrivalled supremacy of the film deity that is James Cameron. But as the first scene slips into focus, the sight of a human being floating weightlessly in 3-D really does seem impressive. I wonder whether this is what it was like when the first ever filmgoers watched the most elementary form of cinema. I nearly reached out to see if I could touch the set during a close up. Fortunately I am encumbered by my own inhibitions and my arm remained firmly on its armrest.

Avatar takes place in the future, in a time where humans have mastered space travel and have arrived at Pandora, a location on a far off moon in search of precious and valuable minerals. The environment itself is not suitable for human life. The air is toxic and the moon is home to dangerous creatures who live in Pandora, namely the film’s main interest, a tribe of sentient semi-human creatures called the Na’vi. The Na’vi live a frugal, self-sustaining life. Their values are communal, non-materialistic and they emphasise respect for their surroundings since Pandora is home to generations of memories, which manifest themselves in the forest in which they live.

Antithetically the humans who seek to reap the moon of its treasures embody a society whose motivations are individualistic, money driven and whose responsibilities are not to their environment but to the shareholders who have invested money in the corporation. Along with a team of scientists and human researchers led by Dr. Grace Augustine (Sigourney Weaver) the corporation has developed a tool that allows certain humans to take on the bodies of Avatars. So when semi paralysed ex-marine Jake Skully (Sam Worthington) adopts the body of an Avatar it is only a matter of time before he feels the need to put his limbs to use and it’s not long before he falls into the company of a tribe of Na’vi who come to trust him. Particularly a young female Na’vi, Neytiri (Zoe Saldana), who teaches him the ways in which they, the Na’vi, live. Jake is left with a quandary: to obey his own race or align himself with the Na’vi

Yes, a fairly traditional plot about goodies and baddies and imperialism, human greed and what not; the comparisons to the war in Iraq are even for a political no-brainer hard to miss. But even with James Cameron’s titanic budget sometimes the plot and narrative was just a bit stereotypical. At the end of the film, during the impressive battle scene, where good and evil come face to face, some of the lines the army general uses are so familiar you wonder whether he isn’t an actor but in fact a well made up pull-string doll straight out of an army surplus shop. But perhaps this rudimentary Hollywood divide between good and bad is forgivable, even justifiable especially considering the deplorable actions of the corporations.

But the main reason why this and the film’s other weaknesses fade away is because the rest of Avatar is simply stunning. It would be hard to watch the film and come out of the cinema feeling untouched by the beauty that Cameron and his teams create. When leaving the cinema I felt that the sight of a host of South London fried chicken shops and broken traffic lights couldn’t really stand up to the lush landscapes and celestial lights on Pandora.  It’s almost as if I was watching a nature documentary at times. And I think what is admirable about this is that the technology Cameron uses is not just impressive in a cold and detached way but rather he couples physical beauty with something more intangible. He imbues the landscape with humanistic qualities. It is the landscape that becomes the film’s real protagonist.

Avatar is a film that could only ever work on the big screen. Its landscapes and the cleverly constructed creatures are little animated gems. Fortunately for Cameron they just about save the film from some pretty bland dialogue, which would otherwise just be a film about human greed that costs £300 million to make.