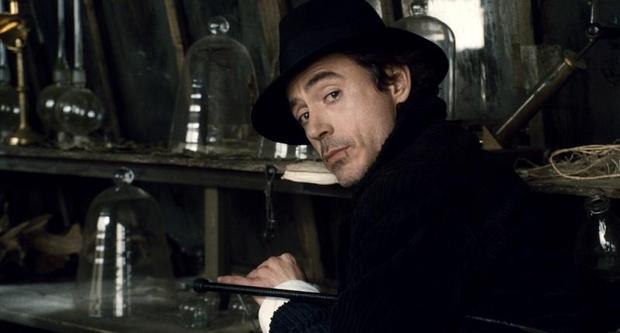 
Deerstalker, meerschaum pipe, magnifying glass, violin (maybe):  these are the things we expect to see in any Sherlock Holmes film.  Well, in this version you’ll see only the violin.

The team of people gathered around Guy Ritchie have produced a very different vision of the Conan Doyle stories, one which might surprise some, but which strikes this reviewer as a much more satisfactory response to the originals, and a significantly better interpretation of a fin-de-siècle vision of literary London than other recent films dealing with similar subject matter.  Instead of the more predictable clichés, the team (reportedly drawing on an original story by producer Lionel Wigram) have taken a number of loose ends, subtexts and stray plot motifs to create a very successful evocation of what Holmes was really about – it is exactly the kind of fresh interpretation of a major literary text that last year’s Dorian Gray failed to offer.  There are other connections between Holmes and a character drawn from Oscar Wilde – the tense homosexual possibilities in the relationship with Watson, the sense of the genius outsider with a clarity of vision not shared by mere mortals, not to mention the louche, debonair urbanity of a gentleman whose relationships are made complex by a richly Victorian combination of drug use, adventure, desire and denial.

This fresh vision of the nineteenth century borrows from a number of preceding innovators who have all lent their insight to this version of Sherlock Holmes to give it a certain edge.  What John Fowles did in The French Lieutenant’s Woman was popularised (and further feminised) in novels such as Sarah Walters’ Tipping the Velvet, showing us that the Victorians did, in fact, talk about sex (if often in coded ways).  As a result we all have a better, sharper, fuller vision of Victorian ideas and attitudes, what they said and what they couldn’t possibly discuss in public (but just did anyway and made art about in the privacy of their studios).  Adding to these literary sources are a number of filmic references taken from places as diverse as Baz Luhrman’s Moulin Rouge and Stanley Kubrick’s Eyes Wide Shut, where the latter may have assisted with its abiding images of ritualised, paganised sexual violence.

Very occasionally, the jokes fall a little flat, and perhaps only here does the whiff of the studio’s team of scriptwriters become a little overpowering.   There is a slight ‘buckshot’ effect in the sense that a hundred different ideas have indeed been gathered from the source material:  Irene Adler (Holmes’s only true love affair), the homosexual sub-text, Professor Morriaty, the drug use, the nods towards issues of contemporary concern and the embellishments of numerous vignettes from the stories…  And all of them make it into the film because there was a real buzz at the script-writing meeting, and, like, we had all these really great ideas…

A design historian could pick holes here and there with some of the finer details of the settings (Tower Bridge is shown under construction giving a date of 1892, but the new Regent Street is also shown and complete which would probably need to be1895 or later…) but that would be churlish given the effective recreation of a milieu.  It would also be nit-picking given the quality of this film, which has created such a vigorous, earthy vision of what became Edwardian London and its key literary creation.

If you haven’t seen the film yet, you may wish to turn away now, and read these last two paragraphs afterwards – because they give absolutely everything away.  On the other hand, you might be the sort of reader of detective fiction who likes to turn to the final pages to find out just who did it, if so, read on.  One of the other themes that this film picks up from Conan Doyle’s Sherlock Holmes (rather than Basil Rathbone’s or Jeremy Brett’s) is the consistent use of scientific method to debunk and undermine the superstitious, supernatural or ghostly (the sort of explanation to which all the other characters in Conan Doyle’s vision of the world always too readily resort).  It’s a bit like the dénouement of every episode of Scooby Doo, where the ghosts of the old miner that terrified the town and destroyed the tourist industry turn out just to be a home movie projected onto the clouds by the embittered old janitor.  In Conan Doyle, this theme is there in numerous of the stories, including ‘the Hound of the Baskervilles’, ‘the Speckled Band’, ‘the Sussex Vampire’, ‘the Devil’s Foot’, ‘the Lion’s Mane’ among others.[1]  With Thelma’s drive to demythologise and hunt out the rational truth, Robert Downey and Jude Law leap, run and pursue the bad guys all over London, lifting the covers of this esoteric meeting or that to show the machinery, technology and scientific explanations underneath.

So it is that the bad guy of the film, ‘Lord Blackwood’ (and his name is one of the more cheesy ideas to have got through the script-writing committee), turns out not to be the leader of an all-powerful magic cult, but a technological genius bent on deploying chemical weapons of unimaginable power.  And if you find the quasi-fascist costuming of Blackwood just that little bit tasteless, you might relish the idea of a poison-gas time bomb ticking away underneath Parliament:  it seems an appropriate way to start this year, in which a more recent hunt for fantasy weapons of mass destruction will return to haunt some of the parliamentarians involved.

[1]   I am indebted here to the Sherlockian (and yes, it is a word) Dr Imogen Davies for her extensive knowledge of Conan Doyle’s oeuvre.

Guided by the Spirit