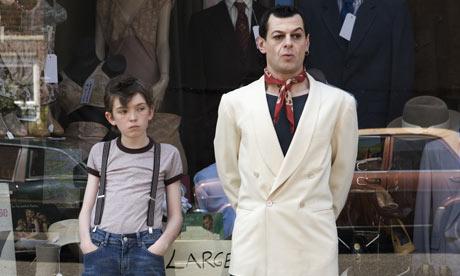 
So we’re three weeks into 2010 and we’ve already got our second rock star biopic. After all, nothing sells better than a dead musician, right? Like Nowhere Boy and Control, Sex and Drugs and Rock and Roll looks at the life of another sensitive but flawed musician. This time it’s Ian Dury, the Essex singer, wordsmith and all round entertainer who rose to fame in the late seventies with his new-wave band The Blockheads.

But like all the best biopics this isn’t just some jumped up Hollywood nonsense that goes out of its way to glamorise Dury’s belligerent behaviour and personal foibles. No, from the outset Whitecross makes it clear that Dury was a self-involved narcissist. The film opens with Dury wooing the crowd in an ongoing concert that punctuates the film. Dury opens with hit ‘Billericay Dickie’, a humorous song about sexual promiscuity. Then all of a sudden we are taken to the world of reality – a far cry from Dury’s world of stories; a world ‘we create to make ourselves feel better.’ Of course the reality of being a married performer makes itself apparent with Dury’s wife Betty (Olivia Williams) shown giving birth to Dury’s son Baxter (Bill Milner) whilst Dury rehearses downstairs with his band. It is this juxtaposition between of the role of performer and father that provides the film with its main source of tension. There’s Dury as the musician, the smooth charming cockney who told unique and marvellous stories and then Dury the absent father, the commitment-phobic alcoholic who lived out his own stories.

I read recently that Andy Serkis who plays Ian Dury, and the film’s director Mat Whitecross together showed the early drafts of the script to Dury’s ex-wife and son Baxter, who had no qualms about wanting to show Dury’s more repulsive side. And I don’t suppose one can blame them for saying this. Over the course of the film Dury does things like inviting his son to stay: he takes him to parties, and sleeps with his son’s twenty-year-old girlfriend, Denise (Naomie Harris). He sacks his drummer, screams obscenities at his songwriting partner to be when he declares his admiration for the band, pours milk over a mixing desk and … well… you’ll see.

Still, the film is far too subtle to be just a condemnation of Dury’s behaviour. And I think this is why it works so well. Whitecross uses flashbacks, parallel storylines and surreal trains of thought to give an insight into Dury’s motivations and his inability to escape the past and his own experiences. The other source of tension that punctuates the film is Whitehouse’s portrayal of Dury as a young Essex boy. At nine years old Dury contracted polio and as a result completely lost the use of one of his legs. Serkis, whose previous acting roles include Gollum in The Lord of the Rings, does bodily struggle so well. Dury’s physical ailment it seems was his Achilles heel as well as a source of inspiration (Dury famously wrote a song about disability called ‘Spasticus Autisticus’). Dury was forced to attend a school for people with disabilities whose ethos was to toughen the boys at any cost. We see child Dury being beaten and bullied. His largely absent father (Ray Winstone) tells him if he is to survive he must help himself because no one else will. Whitehouse draws clever parallels between Dury’s relationship with his father and his relationship with his own son, who, over the course of the film, must come to terms with his own issues. Both boys must find their own ways to cope with their personal plights.

Fear not! The film is not just gloom and doom and there’s as much comedy and song and dance and beautiful wordsmithery here as there is pain and suffering. Serkis is brilliant. The way he moves is at times Gollum-like and he sings Dury’s songs with the same bile and cockney charm. His wit has the same roguish charm as Dury and he delivers some brilliant lines with perfect comic timing. My personal favourite being: ‘The moral of this story is, don't go looking for morals to stories, and if you want a message, fuck off down the post office.’Or when his well-spoken son who is being bullied asks him whether he is posh, Dury looks him in the eyes and says to him ‘Look, son, we’re arts and crafts!’  Dury for all his faults was a funny man, and the film doesn’t fail to acknowledge that.

Sex and Drugs and Rock and Roll is ultimately a sympathetic film. It acknowledges that it is your experiences that shape you. Dury’s father told him from a young age that he needed to forge his own path, to live life on his own terms and to rely on his own wits because he was born at a disadvantage. His father tells him at one point ‘you are born alone… and you die alone.’ We are born alone and die alone but for Dury the way to combat this was by being musically magnificent, which Dury certainly was. But… at what price?