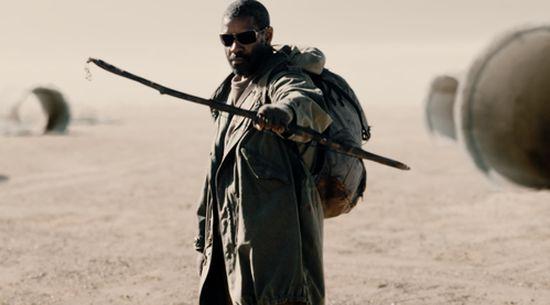 
As if there isn’t enough destruction and mercilessness in the world today to preach about, The Book of Eli transports us half a century or so into the future, where things, inevitably, have only gotten worse. After a nuclear apocalypse has decimated the vast majority of the world’s population (or the USA’s anyway, who knows what’s going on elsewhere), the line between good and evil is so clear cut that the Hughes Brothers’ (From Hell, Menace II Society) fabricated morality really says nothing about our reality today at all.

The Hughes Brothers have created a world in which they can simplify morality enough so they can understand it and preach about it. In a world where people kill each other for what the directors want us to think are the most trivial and basest of reasons, there is no hope. Enter Denzel Washington, a sunglassed, trenchcoat-wearing, solitary warrior, wandering the wasteland, the last beacon of the world’s ‘civilised’ past, possessing near super-hero like killing abilities and oh yes, a Bible. Our hero continues his thirty-year-long pilgrimage to ‘a place where the book will be safe’. There are just so many unbelievable and shallow things in the fundamentals of this film. The world is portrayed to be ‘uncivilised’ and barbaric, but seems to me to be less so than today’s. While, yes, people do eat each other, they kill for survival rather than for greed and self-advancement. And whilst it is true that Washington walks past a gang of post-apocalyptic bandits raping a woman and does not intervene, today we are faced with the most horrific catastrophes every day, all of which as a society we have the ability to solve, and yet we don’t. (One must ask what tiny percentage of the US and the UK’s nuclear weapons budget would rebuild Haiti in a week).

This is why the film, in spite of the slick and bloody action sequences, which one suspects have been put in to try to compensate for its lack of substance, ultimately offers nothing beyond mild entertainment. Its redeeming qualities are sparse, but do come in another accomplished performance from Washington, and surprising cameos from Tom Waits, Michael Gambon and Frances de la Tour. Other than that, and I am wracking my brains, all I can think of is just how attractive Mila Kunis is. The writing is poor and tends to deal in clichés and caricature. This produces superficial, cardboard characters, which limits the possibilities for the actors – for example, Gary Oldman’s performance as ‘the baddy’ is just simply that. He is the one that has a degree of power in a weak world and still wants more. He is the one that ‘is’ evil. And his evil is what justifies Washington’s killing. Ah. What a refreshing formula. Good versus evil, one on one. Straightforward and simple, how we all like it. At times I found myself drawing parallels to Oldman’s portrayal of evil in Fifth Element, which is a comic-book style action comedy about aliens and Bruce Willis. But Fifth Element was not a self-satisfied, pretentious and preaching ­Matrix-esque attempt that takes itself far too seriously and deems itself far more intelligent and insightful than it is.

Parallels will inevitably be drawn with the recent John Hillcoat film, The Road, also about a post-apocalyptic struggle for the survival of good. However, any comparison is unfair on Hillcoat, as The Road deals with its subject matter in a believable, real and subtle way, none of which can be said about The Book of Eli. The ashen landscapes are all too obviously shot through a camera that filters colour, and the barrenness is nowhere near as chilling or as haunting as Hillcoat’s efforts. Where love, sensitivity, pain and fear collide in a world of insurmountable hostility in The Road, fists and knives collide with flesh and meaningless platitudes collide with simplistic conflicts in The Book of Eli.

The film’s climax comes with a big twist that teeters on the brink of ridiculous. I won’t ruin it for you here, but suffice to say you won’t ‘see’ it coming. Furthermore, the film’s central conflict (a battle between good and evil to get hold of the last Bible) is also ridiculous. Gary Oldman wants the Bible from Denzel Washington so that he can control the weak and advance his power, ‘It’s happened before so it can happen again’ being his logic; and Denzel Washington wants the Bible to be kept safe and used to spread wisdom and the Word, and he will kill and maim to see it happen. (He obviously hasn’t got to the bit in his book about the ‘Good Samaritan’, and I guess he must have missed out all those bits about not fighting and killing and living by the sword and all that.) Basically, The Book of Eli is a film that not only requires you to suspend your disbelief, but also your intelligence, worldview and your sensitivity. Its message about religion is boorish, its plot is tenuous and the dialogue is pretty irrelevant. Imagine a shallow, simplistic shadow of The Matrix directed by Mel Gibson and you can’t be too far off.