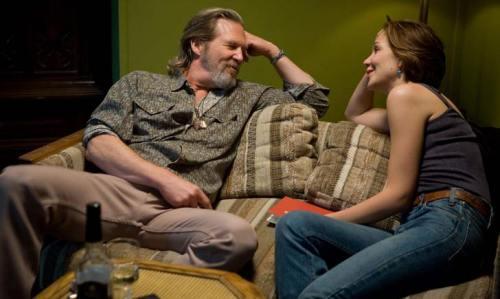 Nothing compares to the life of the touring musician, does it? ‘Life on the open road’, ‘the wind in your hair’, ‘the feel of the white desert sun beating down against your face.’ Ah… yes there’s nothing quite like the all too familiar loneliness of the lifeless highway after a ten hour drive. Playing a show to five hairless couples in a bowling alley for pittance. The glamour! The splendour! Still, for all its pitfalls this is the life that country musician and the film’s protagonist, ‘Bad’ Blake has chosen or rather one that he has found himself thrust into.

Based on the Thomas Cobb novel of the same name, Crazy Heart looks at the breakdown of an ‘old successful’ in much the same way Darren Aronofsky’s The Wrestler did. Whilst the film does not allude to one specific country musician, director Scott Cooper said that beardy types such as Waylon Jennings, Kris Kristofferson and Merle Haggard all presented themselves as sources of inspiration for the film. Through the construction of  ‘Bad’ Blake, Cooper cleverly avoids committing to any one figure in particular, thus avoiding the backlash so prevalent within musical biopics. Instead, Cooper creates his own fictitious musicians living out their own dreams and dramas.

Blake, played by Jeff Bridges, is a country musician with a taste for alcohol and women. Whilst we aren’t really shown where he went wrong (apart from his four failed marriages of course) one can only imagine he spent his wealth on ladies and whiskey and then squandered the rest. We watch as world-weary Blake barely holds himself together, spitting bilious curds at his manager because of his current state of affairs. But when Blake reaches Arizona on his tour he is introduced to a young journalist, Jean (Maggie Gyllenhaal), whom he becomes increasingly besotted with. After a brief stay with Jean and her son Buddy, Blake receives a call from his agent offering him a chance to support his protégé Tommy Sweet (Collin Farrell) who, much to Blake’s begrudging ego, is now one of the biggest selling country artists in America. With that, it is back on the road for old Blake who must now choose between his love for the bottle and for the woman he adores.

But Gyllenhaal’s character, Jean, has her own demons to cope with, what with trying to juggle being a young single mother with her journalistic ambitions; and then there’s falling in love with a bearded drunk musician whose profession involves strumming A, D and E chords. Jean is flawed like Blake, but she is saved by her son, Buddy, or rather by having the responsibility of Buddy’s dependence upon her. Although, her romantic naivety and flouting of her gut instinct shines through as soon as she sees Blake holding his guitar in his faded Levi’s country hat and unkempt beard. It is in the moments that Gyllenhaal brings out Jean’s hysterical teenage girl episodes that she is at her best. But it is Jeff Bridges who really steals the show swinging back and forth between witty cynicism and pathetic tragedy, for instance when he calls his backing band a ‘bunch of hippies’ before vomiting into a bin outside the venue mid-set. Or the way in which Blake trundles around the country in his battered tour van, arriving outside a 16,000-seater venue then berating the soundman before proceeding to play the songs that mean more than the world to him. As with The Wrestler, whilst watching Crazy Heart I could imagine hundreds of older country musicians pointing to the screen nudging their friend whispering, ‘that’s me… that’s me!’

And I suppose for me this is where the film succeeds where so many music biopics have failed. Bridges makes you want him to come through: you want him to get the girl, you want him to bond with the child, you want him quit the booze and to sell records and play better gigs. But when he finally crumbles and drunkenly looses Buddy in the shopping mall it’s clear that Scott Cooper isn’t going to give us the fairytale ending we all wanted.  But then that would be much more boring, wouldn’t it?

The Ugandan determination to make progress