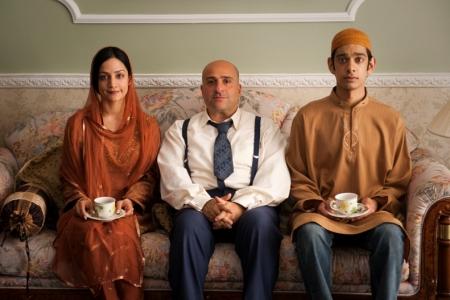 
So this Catholic and a Buddhist walk into a cinema to watch the one about the Muslim who finds out he’s a Jew… stop me if you’ve heard this one before. But don’t groan before you’ve heard the punchline – the set-up may sound like the opening to an awful stand-up set or something out of Disney Does Modernity, but David Baddiel’s film, The Infidel is an exercise in how to make a shamelessly populist movie that doesn’t shirk on script and gags.

It’s beyond my ability to describe how funny parts of the film really are, especially as some of the best moments are when Baddiel makes some borderline bad-taste jokes: as Mahmud, kicking up a fuss at the adoption agency where he’s just found out he was originally called Solly Shimsillewitz, is removed by the security guard, he cries out, ‘What’s this, you find out you’re a Jew and there’s a man in uniform taking you away?’ – something, for example, that could only legitimately be written by someone whose mother was born Jewish in Nazi Germany. Mahmud, as played by Omid Djalili, is a foul-mouthed minicab driver from East London whose faith raps on the driver’s window at the big moments of marriage, birth and death, and takes its place in the back seat for the rest of the ride.

He’s the archetypal British hero – can’t stand pomposity, thinks decent dealing comes before ideology, and who wouldn’t make a big thing of his faith as that’s for priests or hypocrites to do.

Plotwise, The Infidel is comforting. From the off you know that Mahmud is going to be taken to the cleaners by the universe: his son’s about to marry the adopted daughter of an extremist cleric, whilst he finds out the only way he’s going to be able to speak to his dying birth-father is to become Jewish enough to convince Matt Lucas’s uptight Rabbi that he deserves to cross the threshold of the nursing home. And who to teach him Jewishness but his antithesis, the American black-cab driver who lives across the street from his mother’s house. That the plot is a comfort rather than a bore is down to the strength of Djalili as a comic and an excellent script, but also because there is very little more comforting than seeing inhumanity kicked up the backside.

That very British liberalism that pervades the film got cheers from the audience – this cinema lies on the meeting of the boroughs of Brent, Camden and Barnet, surely one of the spiritual homes of The Infidel. The film doesn’t aspire to be an inter-faith dialogue; more of a speed-date between the two religions. They compare hats and gestures, dances and prejudices. The only duff note comes when Mahmud makes his obligatory ‘what I’ve learnt from my journey’ speech, claiming that he spent so much time looking for his identity that he lost sight of who he really was. Now I’m sure I’ve heard that one before… But once that’s out of the way it’s back to applause from the people behind me when the extremist cleric is denounced as (in an expurgated version) ‘a beardy weirdy freak who makes things up’. Potshots like this at those inaccurately described as ‘fundamentalists’ (if they focused more on the fundamentals of a faith you’d think they wouldn’t be so het up about difference) are cheap and easy and great fun.

There was a disconcerting moment when, as someone whose dad looks a lot like a shorter Richard Schiff (Toby Ziegler in The West Wing; Lenny Goldberg in The Infidel) and who walked out of the cinema accompanied by the South Asian Buddhist you might recall from the start of this review, I felt like I might have actually stepped out from the screen and taken The Infidel’s world with me. I wouldn’t have minded if that had been so.