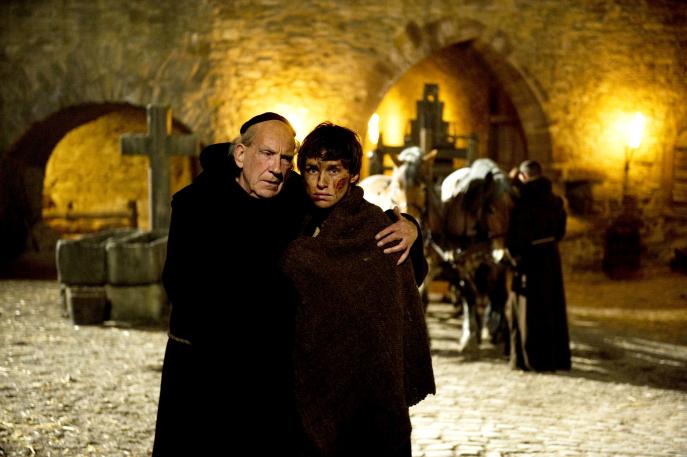 
Well, they weren’t the called the Dark Ages for nothing. It is 1348, and England is being ravaged by the Plague. Bodies are piling high in mass graves, and religious fervour is at an all time high. It is a great, terror-filled setting for a horror movie, and given director Christopher Smith’s credentials (Severance, Creep), that is what one would expect from this film. However, you can open your eyes and release your grip on your partner’s shoulder; what we have instead is a very reflective piece about the nature of evil and violence and how it affects the way people live.

A rag tag group of mercenaries (lead by Sean Bean’s moody Ulric) are sent by the bishop to investigate a mysterious village which supposedly has not been touched by the plague due to a demonic pact. To get to the village in the marshes, they need a guide, so they arrive at the nearest monastery looking for help. The young novice, Osmund (Eddie Redbayne), claims to be from the area, but his real motivations lie in the direction of a young woman he has half-promised to meet there.

The journey to the village does not bode well: the barbarism of the times is in full display; more flagellants, ruthless bandits and the stake burnings of young ladies are all in evidence. This makes their arrival in the pacific marsh village all the more strange. It seems closer to paradise to the scarred men, with its order and abundance of females. However, the church is clearly unused, and it is a lady, the beautiful Langiva (Carice van Houten) that seems to be in charge. Ulric finds one of the village girls wearing an amulet that shows that the men who had been sent to investigate the village had been there. We assume that something terrible must have happened to them. But as the evening’s hospitalities progress, the village turns out to have a distinctly modern atmosphere. The people dedicate their time to godless hedonism, believing that their merriment and time free from God has spared them from suffering. Instead, they place their hopes at the feet of Langiva, a pharmacologist of some skill, her scientific knowledge contrasting with the roughness of Christian mercenary-soldiers.

Essentially, the film portrays the conflict of two worldviews: the medieval and the modern. Its initial attitude projects the modern myths of the Middle Ages, a world where violence, disease, and superstition ruled all, arranged to suit the power-mad Church at its cultural centre. It starts quite typically, then, emphasising the terror of the times, a portrayal of that era that is clearly inaccurate, more a projection of the modern perspective than anything real. For example, the novice Osmund is wrongly called both ‘monk’ and ‘friar’ as if medieval people would not understand the distinction, as your average modern Englishman would not. The film starts with this attitude for a reason. We are meant to see all that is negative with the perspective of the Medieval Christian. When we reach the village, we must sympathise with the post-Christian view that Langiva and her comrades extol, despite the fact that we know from the narrative structure that these people are meant to be baddies. The confusion demonstrates an apparent change in the way we tell stories about the Christian and the heathen, since say the Wickerman. The Christians are not automatically the good guys anymore.

The conflict between the two worldviews is played out by the story of Osmund, whose half-lived vocation is challenged on one side by Ulric’s religious honour and Langiva’s more attractive hedonism. The heathens clearly refuse to acknowledge death, placing their faith in Langiva’s medicine. The Christians, on the other hand, seem to deal with the suffering much more honestly and it seemed to me that despite the barrage of negativity at the beginning, the film does seem slightly to prefer the older perspective. The honesty of the Christians’ acceptance of suffering is what elevates them to martyrs for the truth.

As a playground for ideas, the film could have been a lot more fun. The dialogue is often rough, and unintelligible; most of the lines sound like they come out of a teenage game of Dungeons and Dragons. The story, despite the abundance of gore, is not told excitingly. Now, a film does not need violence to be exciting, but if one chooses not to use that gimmick then one needs something else to tell the story. The acting, as an example, in parts did not work. Van Houten’s Langiva in particular was inappropriately played, seeming more like an alien queen from science fiction than a human being.

There are great, twisting themes here but not much of a story. Given the horror one expects from Smith, there is not enough energy in the direction to drive us through the woods and marshes of this tale. It’s a good thought experiment though, and while not the feast of screams it could have been, one is left with an indelibly dark whispering in one’s mind that needs to be puzzled through, not to an eventual enlightenment, but to a reality of suffering that so often we choose to forget until it engulfs us.

Religious life today - a bridge between the past and the future

Vatican II and the ‘New Evangelisation’