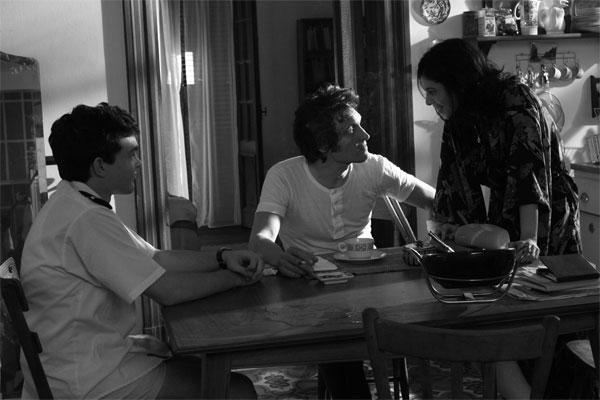 I should begin by saying that this is the third review of Tetro I’ve produced since emerging from its heavy, two-hour embrace. The first review was unwritten and consisted of little more than a sense of relief at standing outside in one of those soft summer evenings. The second was rather more wordy and virulent, fuelled by the sense that behind Tetro there lay a pomposity that needed pricking. What you are reading now is flanked by the ghosts of these two reviews, both tapping me on the shoulder and demanding attention.

I went into Francis Ford Coppola’s Tetro with high hopes – I loved Apocalypse Now and even the Redux version seemed to justify its bloatedness by the scale of what it set out to capture on film. Tetro spreads its arms similarly wide: its topics are familial tension, artistic ambition and life-long guilt – but for all the big emotions there is neither enough control nor enough creativity to pull off an enjoyable film. This is a big disappointment, considering that if anyone had anything to say about the interaction between art and family tensions, it should be someone from the Coppola family (as well as director-daughter Sofia, another scion of the family was involved in Tetro’s production).

It is shot entirely in monochrome, save for the flashbacks and plays within plays that punctuate the film. Black and white has long been shorthand for seriousness, and Tetro doesn’t buck that trend with po-faced juxtapositions of shade and symmetry: lovely to look at, certainly, but hardly enthralling when a film is built on these foundations. What makes it more tiresome is this stylistic architecture surrounds what really are unimaginative metaphors for Vincent Gallo’s ‘tortured artist’ – a moth approaching a lightbulb, an animal caught in the headlights of a car.

This is one of the problems about films centred on that old Western bugbear – Icarus, Faust, Kurt Cobain – the man (because it is invariably a man) whose genius takes him so close to its source of white heat that it destroys him and those who love him. The problem about depicting this on film is that what is interesting about these characters is primarily their talent; their sicknesses and deaths are secondary. For semi-fictional characters like Tetro, we either have to believe without evidence that they are talented or the writer must be doubly creative and come up with a piece of art that the character can claim as their own. Tetro’s secret play, supposedly the masterpiece that wins a contrived Patagonian drama award, is a dodgy melodrama, enacted by characters who seem to have stepped over from the off-cuts of Moulin Rouge. By the second hour Tetro has gone the same way, and when Gallo reappears after yet another teenage sulk, swinging an axe and demanding that his relatives destroy him, it feels like it is time for the EastEnders drums to kick in and save us all.

It is a shame that Tetro is so disappointing. There could have been so much else to it, but its heady influences – Tennessee Williams (the young drifter who arrives in Buenos Aires off a cruise ship), Pedro Almodóvar (sexual awakenings on a road trip), Coppola’s own family life – bang into each other without really getting started. We’re invited to make a link between the domineering patriarch of the Tetrocini family and the senior Coppola, but the shared characteristic that this film hints at is not that of talent but that of refusing to listen to voices offering advice. Whereas Gallo’s Tetro lays claim to being the nonconformist hero who rejects politeness, family and America through the force of his originality, he commits the crime of a slow dalliance with cliché. Films at this speed often get called ‘meditations’, and though it may induce the same effect on your eyelids there is little insight or revelation to be found here.