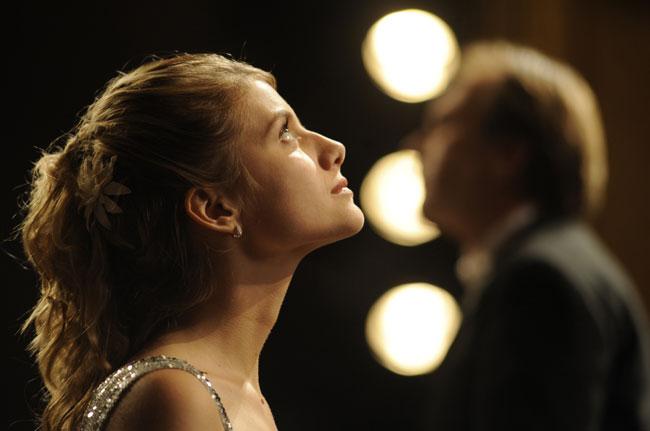 
Even if Le Concert has a plot borrowed from The Blues Brothers, and frequently entangles the themes of political drama and broad comedy, it is a winning expression of the redemption within classical music. Taking the post-Soviet era as a backdrop, and translating the rags-to-riches story into the world of the orchestra, it relates an everyday story of a great artist relegated to the backroom, who is given one last chance to revive his glory days.

Having lost his job as conductor at the Bolshoi, thanks to a brave defiance of Communist anti-Semitism, Andrei enlists his former KGB tormentor as a tour manager, and brings together his old musicians for a tour to Paris. They pretend to be the Bolshoi’s orchestra, demand a famous Parisian violinist for the recital of a Tchaikovsky concerto, before arriving in France to resolve, a little too neatly, the various threads of romantic and artistic ambition.

The strength of the film is in the music itself – both the classical and the brief snippets of gypsy folk – and the ensemble performances. The comedy, which dominates the plotting of the revived company and their relationship with their new manager and his nostalgia for the totalitarian past, is less successful: generic and bordering on stereotypical, it hampers the thrust of the film’s compassion and eulogy for creativity.

Dealing with the issue of communist attitudes towards the Jews, and setting up a finale that symbolically reunites a father and long-lost daughter, the script plays with iconic images and huge ideas - in this context, the almost slapstick comedy is awkward. As a sweeping story about the consequences of past government, and the tension between Russia’s totalitarian past and anarchic present, it is a hopeful parable that marginalises some grim realities – vicious mafia, the waste of talent – to make an articulate and moving comment on the ability of art to redeem.

Paris becomes a symbol of freedom, while Russia is a complicated mixture of nostalgia for the bad old days and a land where oppression has taught the victims only greed and alcoholism. Throughout the film, music connects the characters, coming to represent both hope for the future and the fundamental vitality of a group of people more sinned against than sinning.

Le Concert relies heavily on the final set-piece to resolve the tensions between the characters and the comedy and romantic tones: Andrei’s relationship with the Parisian violinist is troubled, and his behaviour, which hides a secret, appears insane. Yet the music itself is satisfying enough to hold the moment of harmony – a theme that the film constantly promises – and justify the bumbling, boorish stereotypes that overload the first sections. A feel good movie as sentimental as any Hollywood tear-jerker, it alludes to serious contemporary politics and offers a mythical, and stirring, resolution.

Should auld acquaintance be forgot?