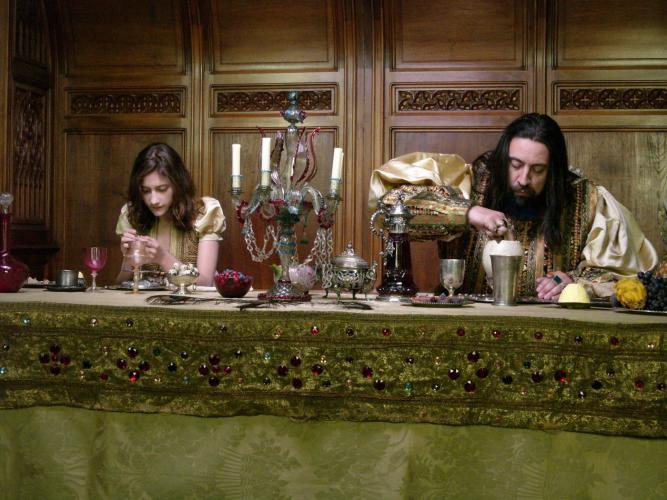 
For those people who prefer their narrative complete, and without ambiguity, then Catherine Breillat’s Bluebeard is a film to avoid. It is the holes in the story, as well as the inconsistencies, that impart the accomplished and controversial French filmmaker’s take on this French literary folktale. Bluebeard appears to be an attack on the patriarchal Catholic Church, and organised religion generally.

The surface level inconsistencies, as well as some of the criticism that has been thrown at this film, could be explained by Breillat’s choice of child narrators. We seem to be in a medieval setting, yet 17th century musketeers also feature; the acting has been called wooden, the child narrators’ limited world view, as well as their less than full emotional repertoire, could explain such kinks in the story. Their inability to comprehend the horror of the story they’re telling also injects moments of lightness in the tale.

The feminist Breillat inserts herself in the story through the characters of Marie-Catherine and Marie-Anne. The children are intelligent and articulate, criticising the conventions of their day. Marie-Anne asks her mother the reason for wearing all black, and being in mourning all the time, asking why they should have to be buried with their father.

The pivotal point in the film is when Bluebeard offers his young bride a key to a room he forbids her from entering. Marie-Catherine, unable to suppress her desire to know what is in the chamber, disobeys Bluebeard’s order. The chamber is the forbidden fruit in the Garden of Eden that Marie-Catherine cannot avoid eating. The parallels with the dangerous female seductress Salome are unavoidable, highlighted at the end of the films when she sits with the head of Bluebeard on a plate.

The character of Bluebeard can be seen as a disparagement of the Catholic Church. He towers over the diminutive Marie-Catherine. He is complex and seemingly inconsistent.

Bluebeard isn’t the ogre we expect him to be from the local stories the characters tell us. When he marries Marie-Catherine, he promises her he won’t share the intimacies of marriage with her until she is of age. He remains true to this promise. Marie-Catherine even has a lot of sway over her new husband, deciding which room she occupies, and having her cup filled by him literally and metaphorically. He tells Marie-Catherine in the most matter of fact way that he has to kill her for breaking his rule. Also inexplicable is the fact that Bluebeard grants Marie-Catherine’s request to use another dagger to kill her, and to change into her wedding dress before meeting her fate. Marie-Catherine doesn’t use these opportunities to attempt escape, but returns to the tower dutifully. This could signal the servile nature of religious discipline, and Marie-Catherine’s impotence to act.

The religious character in the film does nothing to redeem the Church. At the start of the film, we see the children being unceremoniously kicked out of their school because their father has died and they are unable to continue paying the fees. The Mother Superior insists that they shouldn’t mourn, because their father died committing a heroic act, gaining him direct entry to heaven. However, she offers little practical comfort, reminding them that hers is a private school and not a charity.

The narrative of Bluebeard is often annoyingly incomplete and even inexplicable, these supposed downfalls encourage the viewer to ask questions for days after, which may be Breillat’s best accomplishment with this film.