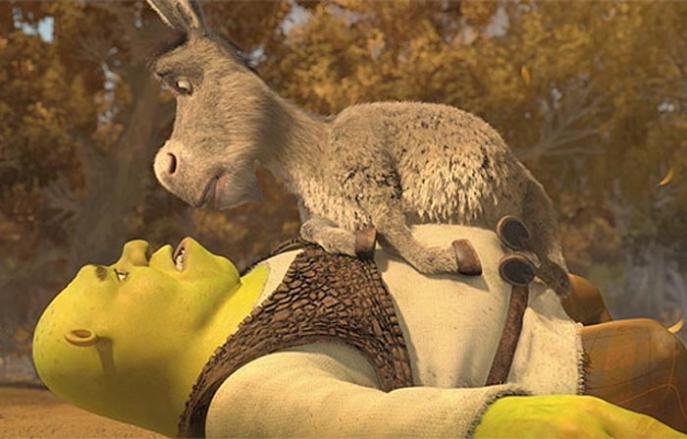 
From the start let’s make one thing clear. This film is great. If you want a good family film that will have something for everyone, then this is it. The fact that it is in 3D adds to but does not enhance the experience. You just get the feeling it was the latest attempt to add one extra ingredient that its predecessors lacked.

Since 2001 filmgoers have been enthralled by the Shrek film series based on the writing of author William Steig. We have come to be charmed by the anti- hero image of an overweight green ogre with a Scottish accent who fell in love with the beautiful Fiona who by day was a princess and by night trapped in the form of an ogre. The Shrek formula has been a great success. The clever intertwining of cultural references to childhood books, Disney films and fairy tales sprinkled with modern music and classic one liners aimed straight at the parent have raised smiles and produced genuine laughter for everyone who has sat through the previous three films.

By all accounts the expectation for Mike Mitchell’s film Shrek Forever After was not high. The sheer audacity and wit of the first film made it more and more difficult to be surprised by the subsequent attempts to develop the characters and be caught unawares by the double entendres and cultural references. The Shrek brand, and let’s face it the brand has been high profile for nearly a decade, has become reliant in trawling in more and more fairy tale characters to amuse us with their clever lines and entertain us with their slightly mad, bad and dangerous identities. Shrek has been unfairly compared to a certain footballer who graced the fields of South Africa recently, but frankly he doesn’t deserve the comparison. At least Shrek can deliver in the box. Or should I say, box office. This film has grossed $526,893,583 so far this year. In a land far, far away money talks and this film has already become the second most successful Shrek film of all.

The plot, and I will use the term with broad brush strokes and no fine edges, is as follows. Shrek (Mike Myers) has become tired of his fame and attention. He has also become tired of being a father and having responsibilities and harks back to the good old days when all you had to do was scare people, be chased by pitchforks and spend many hours in mud swamps accompanied by, er….. nobody. Clearly Canadian Mike Myers has studied Glaswegian men closely and there is more to just the voice comparison. It’s not clear when Scotland will take Shrek to be the latest film hero to embrace as it did with Mel Gibson’s Braveheart, but surely it is just a matter of time.

With Shrek feeling miserable he is lured into the trap set for him by the Brother’s Grimm’s latest character to be brought to the party: Rumpelstiltskin, who is voiced by Walt Dohrm the story editor. He offers him the chance to be a real ogre once again, but just for one day, in exchange for a day in Shrek’s childhood. But the day selected was one he would never remember. But like all Hollywood contracts the deal offered never quite lives up to the promise.

The next hour is taken up with Shrek realising that being chased by a group of witches who look like extras from the Wizard of Oz and men with torches and pitchforks is not quite what he wanted. He is again valiantly supported by Donkey (Eddie Murphy) who apparently takes nearly fifty attempts to get his lines correct compared to Myers’ three and by now it shows. Donkey in the first Shrek had lines and jokes you wanted to remember and recount on the bus home. This Donkey has the appeal of his cousins on a Blackpool beach after a thunderstorm. It just was not meant to be. Murphy needs to bow out gracefully and even by fairy tale standards having a relationship with a big pink dragon is stretching credulity too far.

The writers Josh Klausner and Daren Lemke keep the pace high throughout the film, but the freshness and surprise has gone. The real show stopper is to be found in the visual jokes. The Pied Piper enchanting a group of ogres to line dance will have any viewer laughing. The entrapment of Shrek’s compatriots whilst turning the fair Fiona into a Boudicca heroine harks back to the glory days of the Robin Hood and his merry men dancing to Riverdance in the first film. But there are just not enough to make this film on a par with the first one. But it does enough to entertain and keep the viewer wanting to know what will happen next.

The only shock is to see what has happened over the years to Shrek’s erstwhile compadre, Puss in Boots (Antonio Banderas). The years have not been kind. He clearly has been no stranger to the tapas bar and it is always a great shame to see a screen legend go to the dogs, or in this case the cats. Puss can no longer be called swashbuckling and gracing the silver screen with style. Despite valiantly trying to help Shrek out of his predicament his weight gain and lack of guile blunts his impact and frankly the sooner he goes into therapy the better for all of us. Puss deserved better.

As Shrek’s day comes to a close the spell can only be broken by true love’s kiss. You will need to see the film for yourself to decide whether he manages to break the spell and return to his true love. But perhaps life should imitate fairy tales more than the other way round. If only serious lack of judgements could be cured by a simple kiss. Remember, it’s never ogre until it’s ogre!

In Search of a Midnight Kiss