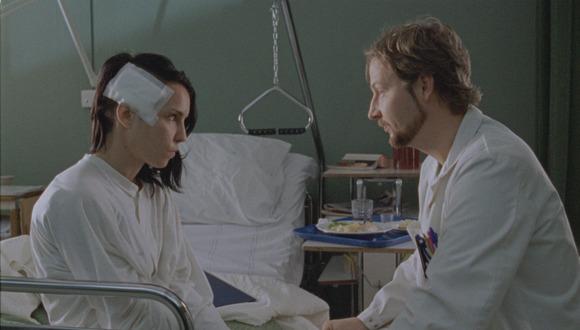 I suppose the makers and actors of this film should really take it as a compliment that Hollywood is already planning the remake of Stieg Larsson’s politically correct trilogy of leftist thrillers – remakes which will doubtless dispense with the Swedish language, the Swedish chain-smoking, the Swedish humourless righteous zeal and presumably the Swedish leftist politics. It’s rather intriguing to wonder what they’ll have left – presumably a mildly feminised version of Jason Bourne. Everything Stieg Larson ever wrote was intended to demonstrate that the warm comfortable bourgeois front of Swedish society cannot bear very much reality. Behind the clean crisp well-ordered facade lie dark and horrible things – violence and corruption and most especially the violence and corruption which supposedly liberal men perpetrate against women. It’s really not Hollywood.

So, let’s stay with the original – the second outing of the world’s first bisexual female action hero. Lisbeth Salander (Noomi Rapace) is, once again, political correctness gone mad, or at least personality disordered. As a newly retired psychiatrist once told me (after a couple of pints) the term ‘personality disorder’ describes a person who doesn’t know what good looks like but desperately wants to be it. Perhaps she never saw it modeled when she was young enough to understand. Perhaps her emotional learning difficulties made her incapable of understanding. Either way, they are people who are filled with a hope and a doubt that they can be good. Sometimes it is a hope too much disappointed which corrodes within them to a poisonous sociopathy. Other times it is a crusade which propels them on a trajectory of truth and justice. And so, propelled by her demons, Lisbeth meets the world with a burning desire to be and to do good, but absolutely no notion of how or even why.

So, in this second episode of the trilogy, Lisbeth awakens from a nightmare a year after the last episode in which she and Michael burned a nest of Swedish neo-nazis. She is blond, rich and idly luxurious in the Caribbean, yet still pursued by the demons of her past. The news of her mother’s death commits her finally to return to Sweden, to take arms against her sea of troublesome memories and by opposing, end them. Within a minute of cinematic time, she returns to the grim grey concrete of Stockholm International airport, to Miriam Wu (Yasmine Garbi) her old Chinese girlfriend, to black hair, black leather, black eye make-up and her old black arts of cyber-stalking.

Meanwhile back at the Millennium magazine, our journalist hero Michael Nyqvist (Mikael Blomkvist) has found comfort in the arms of his boss, the proprietor of the magazine. But at work, two of his young reporters are breaking a story on a sex trafficking scandal with sex and corruption in high places – a story that will shake the powers in the land – exactly the sort of story the campaigning leftist Millennium magazine was founded to pursue. But the two young cub-reporters are murdered, along with Lisbeth’s social worker and personal rapist. And the gun used to kill all three carries Lisbeth’s fingerprints. Suddenly Lisbeth is on the run for the murders and Michael must find the evidence to exonerate her and convict the true culprits. So far, so typical of the genre.

But it gets a little better. Along the way Michael (now too old for the rough stuff) engages the services of Paolo Roberto, a real-life professional kick boxer who remembers Lisbeth from old sparring sessions and brings some junior muscles to the party. Lisbeth ripples her dragon tattoo, terrorizes the low-lifes of casual fascistic Swedish misogyny and has one joyful chase sequence on a beautiful Harley Davidson. Gradually, she tightens the net around the baddies – Zala – a Russian KGB defector with friends in high places and a Dolph Lundgren look-a-like assistant villain. But for Larsson, the political is always personal; the deformities in a wider dysfunctional society are framed within the distortions of Lisbeth’s family history. What was done to her was done to Sweden as a whole. And so the evil she confronts is the evil within her own family and nation.

Sadly, political preaching – however right-on – rarely makes good thrillers. The new director, Daniel Alfredson, probably with half an eye to the Hollywood remake, has softened Lisbeth’s character to the point where she is in danger of growing up into a girl who just wants to be loved – and that surely can’t be right for Larson’s gimlet-eyed cold crusader. Even worse, he softens the Swedish landscapes – the harsh black and whites of truth and justice that dominated the last episode are replaced by the Swedish Tourist Board’s palette of warm rural greens and browns, where children play happily outside idyllic country cottages, entirely unaware of the murky depths of the adult world.

At times, the plotting is as limp as an underdone pizza. There are rather too many ‘he’s behind you’ moments. No Swedish villain ever locks their front door. And it also adheres closely to the modern filmic rule that bad things only happen to bad people. So characters once established as ‘good’ become as indestructible as Terminator 3, escaping unscathed from inside burning buildings and (every neurologist’s favorite plot-hole) after being knocked unconscious, they recover within 60 seconds to full fighting strength, bar a few showy bruises.

Perhaps worst of all, Mikael Blomkvist’s role is cruelly cut to that of a concerned spectator – rather like the coldly compassionate Morse – except that Morse used to solve the crimes, bring order out of chaos, justice out of the human mess. Blomkvist actually achieves nothing toward the advancement of the plot, other than a worried looking gaze at moments of stress. And there isn’t even an ending for the scrupulous reviewer to conceal. Even when the goodies win, there is no bonfire of the evil. Even they have to be preserved to fight another sequel.

So I came away disappointed with characters that seemed already to have relinquished their individuality to Central Casting. And the next day, I went mutteringly to work and grew in my discontents right up until the late afternoon when a new patient came in. Initially I was struck by her facial and physical resemblance to Lisbeth – bar red hair and a Glaswegian accent. And then the story she told retold so many parts of Lisbeth’s own. And a distant memory stirred of the song over the closing credits: Misen Groth singing her Kyrie Eleison in search of love:

Can you hear me?
There is no light to see.
Would anybody die for me?

It is the closest I have ever come to prescribing a film.

And I hope that both Lisbeth and my patient will eventually encounter someone who is prepared to die for them and so discover what good looks like.

And I hope to see them both again.

The Girl Who Played With Fire - Official UK Trailer