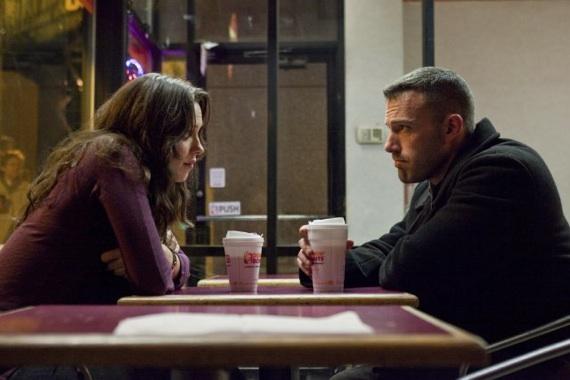 
Boston’s infamous Irish community has provided the source material for some pretty good films of late. Three were popular with Oscar judges: Good Will Hunting, Mystic River, and The Departed, the first of which earned Ben Affleck and Matt Damon the Academy Award for Best Original Screenplay. Affleck’s first film in the director’s chair, 2007’s Gone Baby Gone, focused on the same community and was a hit with the critics. Why have Charlestown and South Boston become the new Harlem, Brooklyn or East End of London? The unique accents? The picturesque New England setting? Perhaps, but my money is on the Irish wit and the Catholic sense of sin and guilt that makes for great drama. In his latest film, which he both stars in and directs, Affleck is sticking with the people and places he knows. However, unlike the films mentioned above, The Town is a less serious escapade, a surprising, bittersweet jaunt over Boston’s mean streets and a glamorisation of the macho, bank heist film genre.

The plot follows the archetypal heist movie in an almost entirely paint-by-numbers fashion: it starts with a bank robbery; a cat-and-mouse chase involving police officers and the criminals (led by Affleck and The Hurt Locker’s Jeremy Renner) ensues; a love interest is thrown in; and the film ends with a ludicrously implausible heist with a clever twist. The only slight divergence from the classic formula is the amount of screen time devoted to the love story and the female lead, as Affleck’s Doug Macray falls in love with the bank manager, Claire Keesey (played by the charmingly authentic Rebecca Hall), who is taken hostage by the masked criminals in the initial robbery. They keep her driver’s licence, but after they release her they notice she lives near Charlestown, just four blocks away from her kidnappers. Renner’s character, James Coughlin decides he must find out how much Claire knows – would she be able to recognise them if she heard their voices again? – but worried about the way in which his friend might deal with the beautiful lady, Doug volunteers to talk to her instead. He becomes smitten, and the plot develops from there, with many suspenseful moments of possible revelation scattered throughout. Meanwhile, the robbers are being investigated by FBI agent Adam Frawley, played by Jon Hamm of Mad Men fame in all his suave masculinity.

But does the world really need another heist movie? One has to wonder while watching The Town. It does have more to say than most films in its field, but despite his efforts to comment on deprivation at the beginning of the film, Affleck decides to primarily play the entertainment card here. While the film is as slick and professional as an expert raid, the social analysis feels light when compared with Good Will Hunting and Gone Baby Gone. The bits of social commentary that are present seem to be there solely to make Doug look more interesting to Claire, and successfully so – the odd thing is that we understand why the sophisticated Claire would fall for a big lug from the Town. The relationship, despite its preposterous setting, has that all-too-rare, credible chemistry and furthermore feels almost logically entailed by the plot.

The film’s mix of realism (or at least realism Hollywood does it) and action make it an odd monster. It does feel like it has a heart of gold that flickers through at times in the love story; but at the other extreme, the absurd but entertaining setting of the Red Sox baseball stadium – Fenway Park, the ‘cathedral of Boston’ – for the climax would have been better suited to a film like Ocean’s Eleven. It undermines any kind of authenticity the film had. A real problem lies in the fact that the genre has been thoroughly and fundamentally lampooned by the recent Four Lions. The structures of the two films are so similar that I sometimes felt like I slipped into the British comedy while watching The Town. I started wondering why I was not laughing.

The Town ends up being escapist fun, and a few years ago I would not have believed it possible that I would one day say that I want to see more from Affleck. He revisits familiar themes of romantic love set against brotherly loyalty, what makes a man great and coming of age quandaries, in a mostly thoughtful way. However, it’s flawed fun; with Affleck’s signature all over it, it is neither stupid nor amateur, but it is a potentially excellent film squandered by an old hat format. Nevertheless, given its critical and commercial success I believe Affleck will be revisiting The Town, or least the general neighbourhood, some time soon.